Growing Rice at a Cost in Vietnam's Mekong River Delta

Growing Rice at a Cost in Vietnam's Mekong River Delta 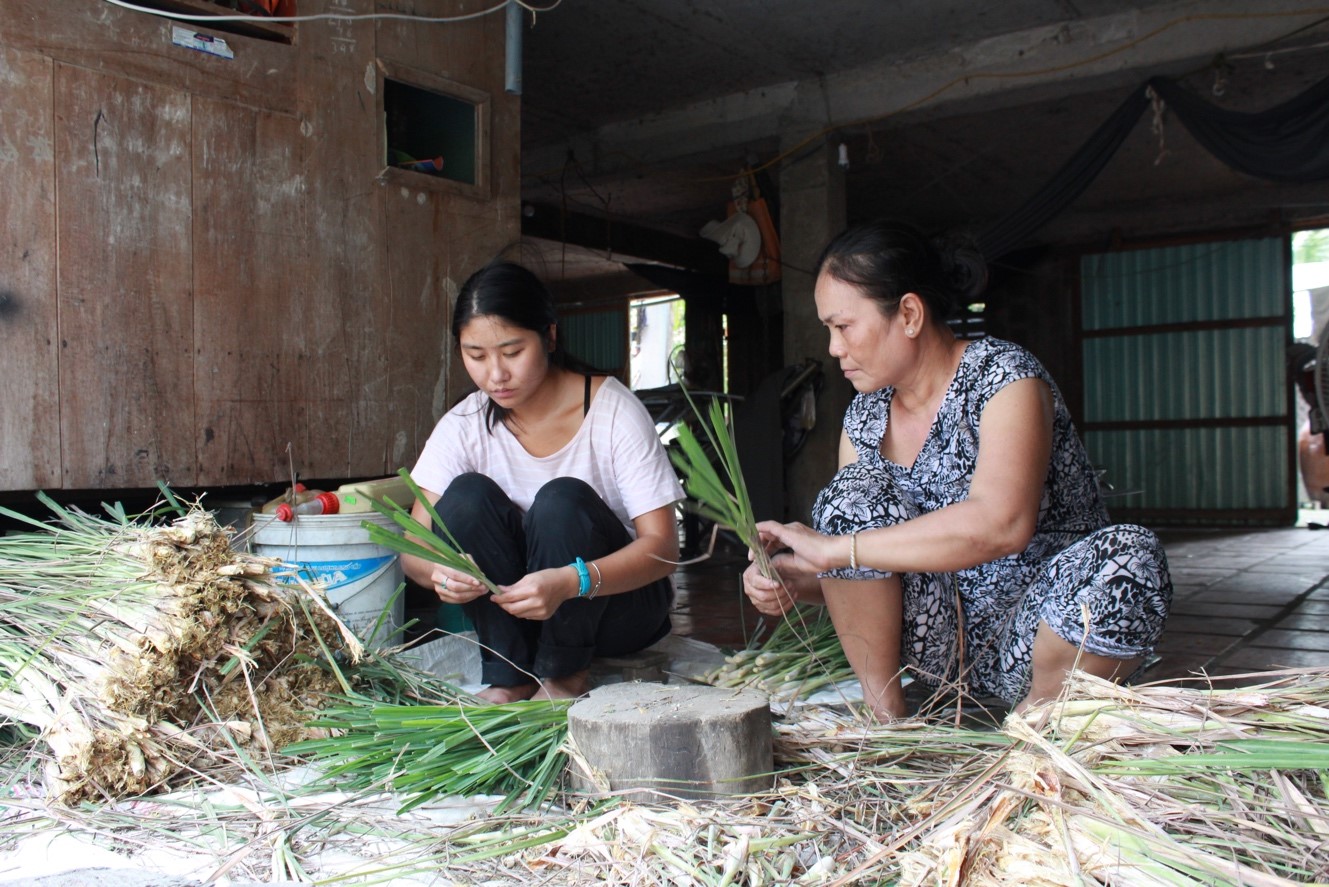 After waking up from a nap during the hottest part of the day in Vietnam’s Mekong River Delta, I join Mr. Văn and Mrs. Thủy, a husband and wife rice farming couple, as they cut and prepare lemongrass stalks for sale in the local market. As an anthropology graduate student, I find myself far removed from Purdue University’s corn fields standing with my feet submerged in the mud of rice fields in southern Vietnam to explore how rice farmers navigate the production demands of feeding Vietnam while also cultivating a good life. Mrs. Thủy describes to my research assistant, a local consultant at the Research Center for Rural Development in An Giang Province, how she and her husband became rice farmers at a time when the price of rice was “acceptable” and farmers could earn enough of an income to live. We sit on low wooden stools in between piles of lemongrass stalks waiting to have their outer dead layers peeled back before transforming into a state of crisp green stalks. These stalks are then washed of the sticky residue near their roots before being wrapped, tied, and tucked into large bags ready for sale in the local market. The fragrance of lemongrass engulfs the air around us before being whisked away by the electric fan in the corner, reminding me of the light citronella smells from mosquito repellant candles on a summer’s evening back in the US. I dare to stand after crouching for three hours, reaching for each lemongrass stalk and dirtying my clothing with white, moist, torn pieces of lemongrass that I peeled right into my own lap. My aching back seems miniscule compared to the tired announcement I received this morning from Mrs. Thủy about bringing a previous days harvest of 200 kg of lemongrass to the local market for selling at 4:30 am. But after an afternoon’s nap, sitting in between piles of lemongrass as Mr. Văn proceeded to bring more, the ease of sitting in the shade and chatting was a welcome task that earned 5,000 VND/kg (~$.22) a day in comparison to the 4.500-5.500 VND/kg (~.02 cents) of rice harvested every 3-4 months. After Mrs. Thủy finished telling me about how expensive her daughter’s wedding will be this upcoming year, she said that growing plants like lemongrass, coconut trees, and a local plant called điên điển, or Egyptian riverhemp (Sesbania sesban (L.) Merr.), will provide more opportunities to increase their income in a way that rice does not. 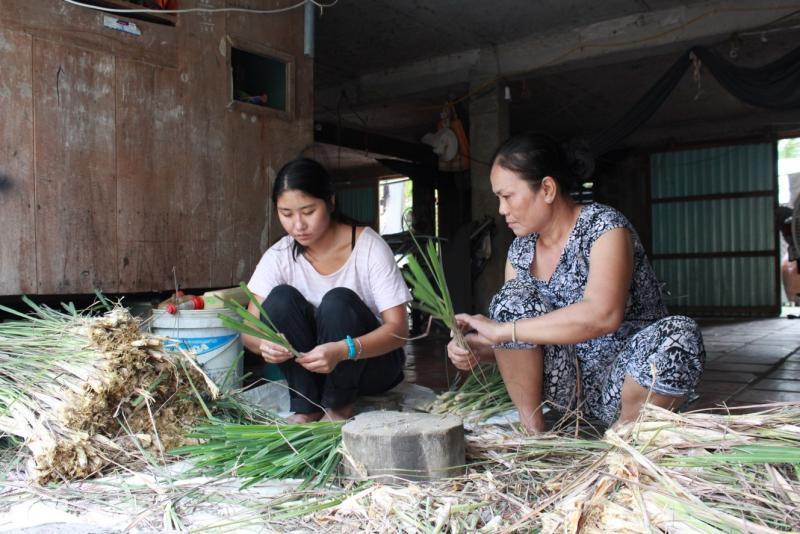 Mrs. Thủy checks to make sure I am correctly cleaning lemongrass stalks that will be sold in the local market.

Mrs. Thủy says, “Nowadays rice farming is not stable and it cannot ensure our life. So now, we need to switch to other plants. But, because rice is traditional in the Mekong Delta and Vietnam, we don’t want to transfer completely from rice right now - but maybe in the future” (All quotes have been translated from Vietnamese to English). Her husband echoed these thoughts in a mapping exercise to better portray how farmers are envisoning these agricultural livelihood changes. He drew his current houshold property, including the vegetables growing throughout their yard, a fish pond behind their house, orchids his children sell in the nearby city, as well as their 1 hectare of rice growing amidst a stretch of other farmers’ fields. When I asked Mr. Văn what a food secure household would look like, he took a green pencil and etched within his carefully drawn 1 hectare (2.47 acres) rice field, a mix of canal banks with coconut trees and lemongrass bundles next to a 0.3 hectare shrimp pond. He said that as he gets older, he will no longer be able to farm rice because it is too labor intensive. With this new model of agriculture, he will still be able to contribute to the Mekong River Delta’s agricultural production. I left his house with many thoughts, mostly originating around the question from a rice farmer in southern Vietnam in 2016 that started my dissertation research: “If we can’t grow rice, then what?” For Mr. Văn and Mrs. Thủy, their envisioned future depicts that rice production is no longer enough for a secure livelihood.

Vietnam’s Mekong River Delta, known as Southeast Asia’s Rice Bowl, has risen to become the second largest global exporter of rice because of national government policies supporting increased rice production and better rural livelihoods for farmers. However, these policies may not be enough for rice farmers whose lives are so closely tied to the income they can, or sometimes cannot, receive from a rice harvest. I came to An Giang Province seeking to understand how these governmental policies supporting increased rice production impact farmers’ livelihoods. Two Vietnamese policies shifted rice production from one to two crops per year in the 1980s and finally to three crops per year in the early 2000s. These policies sought to increase Vietnam’s own supply of rice and increase global exports of rice. These two policies are important because intensifying rice production to 3 seasons per year means that the rice fields do not have time to rest in between each harvest, which leaves them susceptible to pests, diseases, and poor soil health. Before intensive rice production began around the 1980s, farmers would cultivate one rice crop per year and allow the flooding season (between May and December) to let the fields rest. Intensive rice farming of three crops per year has meant that farmers must increase their use of fertilizers to 3-4 applications per season and pesticides to 5-6 applications per season. The unintended consequences of intensifying rice production, a policy that was meant to increase Vietnamese food security in the first place, has stressed other parts of farmers’ livelihoods: fish are disappearing from the rivers, farmers are getting rashes from bathing in pesticide residue in canals, and landowning farmers take extra jobs as farm laborers to make enough money to continue farming. 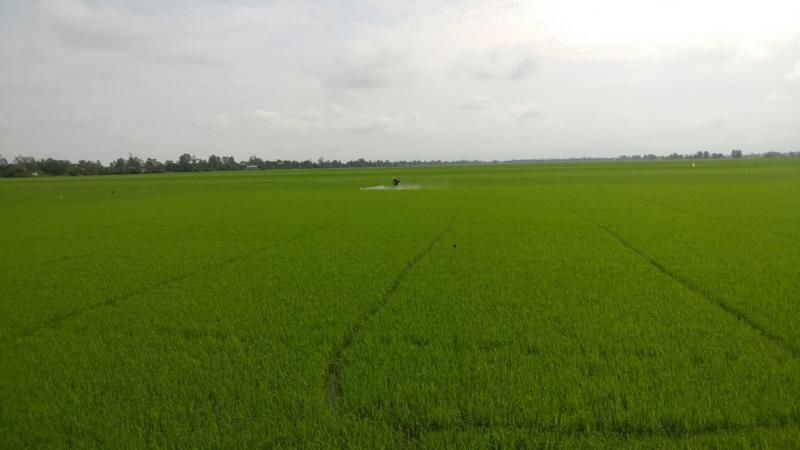 A farmer sprays pesticides in January 2018 in An Giang Province, Vietnam

Mrs. Thủy said that when she was raising her eldest daughter, her neighbors would join together to form a search committee to find all the children who were lost biking home from school because the heavy rain storms had washed out the road. She always followed up stories recalling the past with a quick, “life is so much easier now”. Government aid and international aid supported 10-20 years of rural development so that families could have electricity and wireless internet in their homes and gas-powered water pumps to flood their rice fields. Children ride their bicycles back home in the mid-morning for their lunch break and immediately jump on their phones. The sounds of beeps and boops come from games on their smart phones or Indian movies dubbed into Vietnamese echo from houses. While many livelihood changes have improved quality of life for these farmers, they confront new challenges of a rural livelihood where a meal is never complete without rice, “cơm”. 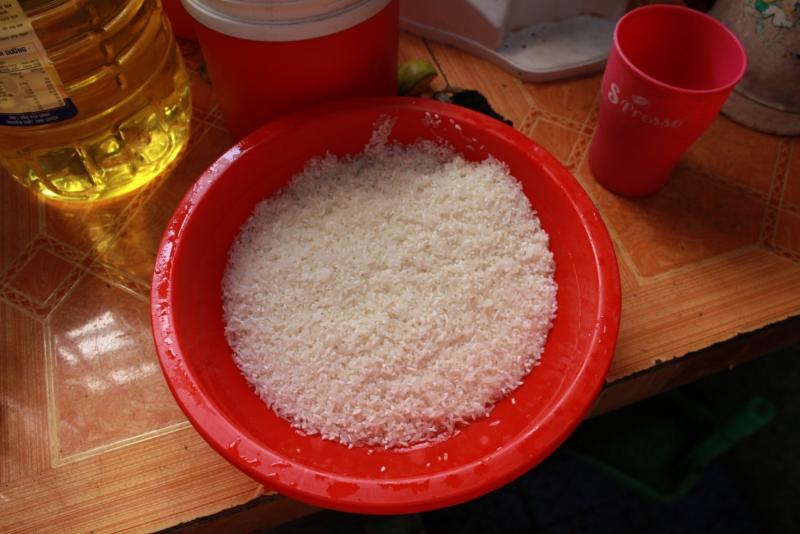 Rice is a staple food in many Vietnamese farmers’ houses. Pictured here is “gạo” or rice that is not yet cooked. This is a mixture of two different types of rice: “gạo khô” or hard rice and “gạo thơm”or fragrant rice. Hard rice is more commonly grown in this particular commune and sells for less than fragrant rice.

In the Vietnamese language there are many words for rice: pre-harvested rice is called lúa; post-harvested rice is called gạo; and the steamed rice that is usually served in small handheld bowls with a pair of chopsticks laid on top is called cơm. However, when your friend asks if you’ve eaten yet they’ll use “cơm” as a sit-in for other words like meal or food. Mr. Văn and Mrs. Thủy told me that rice, cơm, is the most important part of a meal and that it means you will feel full. Another rice farmer, Mr. Thái described a time when he experienced food insecurity when “we only had porridge (cháo) to eat instead of rice (cơm)”. Cháo is a soup-like porridge made with rice, eaten when families did not have enough rice to eat. The importance of rice, as a crop (lúa) and as food (cơm), can be heard in the memories of hunger in the post-1975 Reunification of Vietnam period, when food was scarce and flooding destroyed the rice crop. Mr. Văn and Mrs. Thủy’s identification as rice farmers of Vietnam and of the Mekong Delta floats between histories, present days, and future times. While their families overcame histories of hunger and a need for rice, they now face a present in current policies and agricultural production methods that threaten rice quality and building livelihoods that depend on a precarious rice crop. Some farmers can see a future in which they resort to old methods of agriculture to restore the environment and diversify their production, but others only envision producing rice despite the increasing challenges of being a rice farmer. This uncertainty is important because policies meant to protect the food security of Vietnamese people have put an unintended stress on rice farmers’ ability to maintain food secure households. Farmers are not sure what their futures will look like, but for many, the question posed earlier- If we can’t grow rice, then what?- looks more like, we will grow rice, and what else? 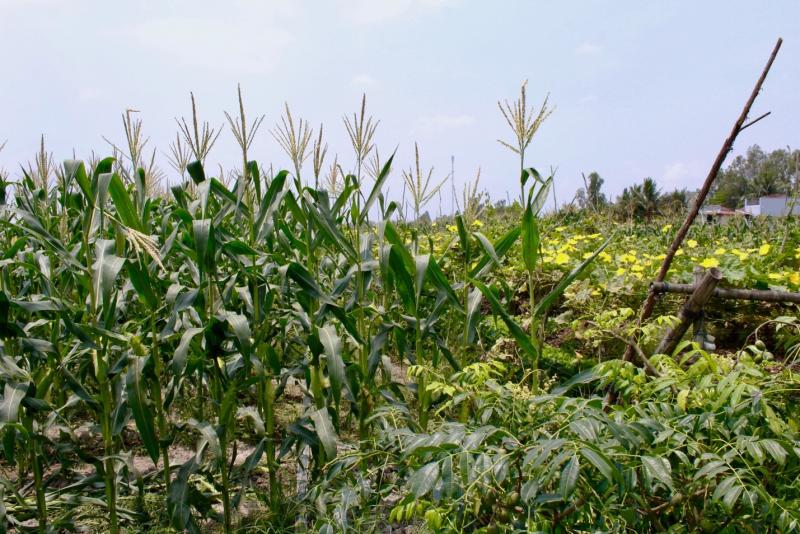 A farmer’s yard where he grows corn, bitter melon, ambarella, and water hyacinth for a mix of consumption and selling. While most rice farmers grow fruits and vegetables in their yards for consumption, crop diversification for selling is becoming more common. However, diversification comes with a mix of responses from farmers. Rice farming requires a lot of collaboration between farmers to sync planting, spraying, and harvesting periods, based on when their fields can be flooded with canal water and when this water can be released back into the canals. Farmers interested in growing more than just rice fear what their neighboring farmers might say and how this will impact their neighbors’ rice fields. The yard pictured here is separate from this farmers’ rice field, but if he were to expand his corn production he would need to expand into his rice field and build a bank to prevent canal waters from flooding into his non-rice crop fields. Diversifying household incomes within a majority rice farming community comes with its challenges.

Sarah Huang is a PhD Candidate in Cultural Anthropology with a concentration in Ecological Sciences and Engineering and Applied Anthropology at Purdue University. Her research interests started from a love of her mom’s kitchen, bowls of rice, and an endless appetite. Currently, she explores food security governance, agricultural production, and farmer livelihoods in An Giang Province, Vietnam. Her work is funded through a US Borlaug Global Food Security Research Fellowship and Purdue University College of Liberal Arts. She is supported by the Research Center for Rural Development at An Giang University and the Center for Cooperative Development in Vietnam’s Ministry of Agriculture and Rural Development. All photos taken by Sarah Huang.