FOR THE 2022 CONFERENCE TRIFECTA, THE UNDERGRADUATE AWARD WINNER WILL RECEIVE $500. PLEASE SEND IN YOUR NOMINATIONS AND APPLICATIONS BY JANUARY 31, 2022. 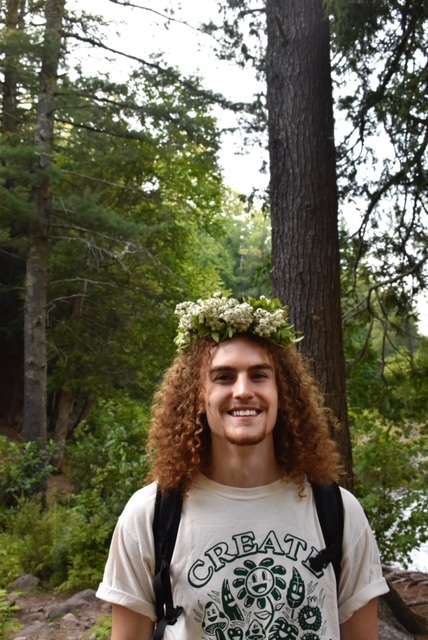 2022  Ricky Rietjens (Medicinal Plant Chemistry and Indoor Agriculture, Northern Michigan University)
Ricky Rietjens is a senior at Northern Michigan University studying medicinal plant chemistry and indoor agriculture. His capstone research examines terpene synthesis of Cannabis sativa L. inflorescence in response to UVB addition and attenuation. Ricky’s love for plants, people, and culture can be seen through his interests outside of phytochemistry, which include ethnobotany, mycology, medical anthropology, pharmacognosy, phytoremediation, agricultural sciences, and sustainability. Ricky enjoys foraging for edible and medicinal plants and fungi native to Michigan's Upper Peninsula. Along with foraging for meals and herbal medicines, he spent his summer donating time at a local farm (Partridge Creek Farms) that provides free education and affordable produce to the Marquette County community in order to help combat food insecurity. Ricky plans to attend graduate school next year, and hopes to one day travel the world discovering and categorizing natural plant medicines, in addition to understanding their cultural use and medicinal efficacy.

2020  Rosslyn Mackay (Anthropology and Sustainability, Dalhousie University)
Rosslyn Mackay is a student in Anthropology and Sustainability at Dalhousie University, and recently completed coursework at Athabasca University with Dr. Janelle Marie Baker, to deepen her knowledge in ethnobiology. Her research focused on traditional wild foods and the ethnomedicines of the Rosaceae family and the impacts of industrial rose production in Latin America and ancient Celtic ethnobotanical garden design. She is also a graduate in Landscape Design from Ryerson University, where her passion for ecological restoration for climate solutions took root. She will be spending the next year at the University of Victoria, studying Restorations of Natural Systems. She hopes to apply her research towards a Master’s degree in Landscape Architecture to help adapt design to climate action through the lens of reconciliation. Her love for ecology, ethnomedicines, and ceremonial studies have brought her to Peru, Mexico, Northern California, Vancouver, and Ontario, where she volunteered with various ethnobiological projects.

2019  Sydney Hunter (Archaeology, Boston University)
Sydney is an undergraduate at Boston University studying archaeology with a focus on paleoethnobotany. Her current research focuses on the development of agricultural strategies in Central Asia using both micro and macrobotanical remains. Her undergraduate thesis examines early agriculture in the ancient city of Kath, Uzbekistan during a time of agricultural and economic transition. She hopes to attend graduate school in the near future to study agricultural sustainability and the role of trade networks throughout Central Asia in the historic periods. Sydney plans to apply her studies of sustainability in desert climates in the past to help modern societies adapt to climate change in the future. Through her position, Sydney hopes to make the Society of Ethnobiology more accessible to undergraduate students and to connect students with mentors to facilitate new opportunities for research within the field of ethnobiology.

2018  Chlöe Fackler (Environmental Biology, Botany and Anthropology, McGill University). Chlöe Fackler is a junior at McGill University. Her research interests include Texas ethnobotany, connections between folk taxonomies and phylogeny, North American orchids, and the relationships between folklore and ecology. She hopes to attend graduate school and explore the changing dynamics of the US-­Mexico border, urbanization, and fossil fuel extractive industries in Texas, and study their effects on the peoples and ecology of the region.

2017  Hope Loiselle (University of Maryland). Hope Loiselle is a junior at the University of Maryland studying anthropology and archaeology. Her research interests include zooarchaeology, historical ecology, and island and coastal archaeology. She hopes to pursue graduate studies in archaeology with a regional focus in the Pacific and study past human interactions with marine ecosystems. Currently, she is completing her honors thesis under the guidance of Torben Rick at the Smithsonian Institution’s National Museum of Natural History, conducting a zooarchaeological analysis of small cetacean bone from Seaside, Oregon. She is also working with Miguel Vilar, lead scientist of National Geographic’s Genographic Project, to study the peopling of Micronesia from a genetic perspective. She studied abroad in New Zealand last semester, where her passion for Pacific archaeology first developed. Her love of zooarchaeology started as a sophomore when she began working in the UMD Zooarchaeology Lab under the guidance of George Hambrecht and Barnet Pavao-Zuckerman. Hope is also the president of the undergraduate Anthropology Student Association.

2016  Lindsie Linaburg (Frostburg State University). The 2016 Undergraduate Ethnobiologist Award, goes to Lindsie Linaburg. Ms. Linaburg is a senior in the ethnobotany program at Frostburg State University. She is committed to course-related applied ethnobiology projects in Cherokee, Maryland, and New Zealand. Lindsie's enthusiasm impressed the committee along with her expressed interest in being a long-term society member. Lindsie will be invited to sit on our Board as an appointed "Student Advisor". We look forward to working with Lindsie and encourage everyone to join us at the General Business Meeting on Friday afternoon (Mar 18) where she will be presented with the award certificate and applauded by the membership.

2015  Aidee Guzman (University of Wisconsin-Madison). Aidee Guzman is a student of Eve Emshwiller at the University of Wisconsin-Madison. She will be graduating this May with a Bachelor’s of Science in Botany and Environmental Studies. She has completed two senior thesis research projects, one on the impacts of honeybee hive placement on cranberry pollination and one on the effect of Mexico-US immigration on the transmission of plant knowledge. Our awards committee was impressed by Aidee’s coursework, her extensive research experience, and her leadership skills. She has even prepared and submitted an NSF-GRFP proposal with the support and guidance of Eve Emshwiller and Gary Nabhan for her upcoming graduate school plans upon graduation this May. Her ideas on ways to increase undergraduate student involvement in the Society were achievable and worthy of considering for implementation by the Society. She suggested several things, including faculty and graduate student SOE members mentoring undergraduates at their home institutions, a career panel for undergraduates (and graduates) at the conference, and formal pairing of students with mentors at the conference. We are pleased to have Aidee Guzman selected as the 2015 Undergraduate Ethnobiologist Awardee.

2014  Martin Aucion (University of North Texas). Martin Aucion is the recipient of the Society of Ethnobiology’s 2014 Undergraduate Ethnobiologist Award. Aucion is double majoring in Geography and Anthropology, with a minor in Biology, at the University of North Texas. His undergraduate thesis addresses how local food systems create community at farmers’ markets and connect producers and consumers to a sense of place in the Dallas/Fort Worth area. Auction’s ideas for stimulating undergraduate participation in the Society of Ethnobiology include holding student oriented seminars at the annual meetings and promoting student submissions to the society’s publications, the Journal of Ethnobiology and Ethnobiology Letters.

2013  Allison Gracer (Environmental Studies, UC Santa Barbara, 2013). Allison Gracer was presented with the 2013 Undergraduate Ethnobiologist Award at the Annual Meeting of the Society of Ethnobiology Meetings in Denton, Texas. She was the applicant with the best idea for increasing student involvement and participation in the Society!

2012  Jonathan Dombrosky (University of North Texas). Jonathan Dombrosky, an Anthropology major at the University of North Texas, has been selected to receive the 2012 Undergraduate Ethnobiologist Award.  This award supports membership and meeting participation for a student who will advise the Board of Directors on undergraduate participation in the Society.  Jonathan is studying zooarchaeology with current Society Treasurer Steve Wolverton.

2011  Alex McAlvay (Western Washington University). The Society of Ethnobiology is pleased to announce that Alex McAlvay is the first recipient of our "Undergraduate Ethnobiologist Award".  Alex is a senior biological anthropology student at Western Washington University in Bellingham, Washington. His chief interests are in evolutionary medicine and nutrition. Among other accomplishments, Alex has undertaken several projects related to indigenous diet, especially in the Cascadia region of the NW US, including establishing a native plant demonstration garden at Mercer Island Library. He has lived and participated in farming on the Navajo Reservation; done fieldwork in Kwakwak'wakw gardens, Kingcome Inlet, BC; and he has work experience at Huichol Center for Cultural Survival and Traditional Arts in Huejuquilla, Mexico; Herb Pharm (a tincture manufacturer and herb farm); and the University of Washington’s medicinal plant and ethnobotanical gardens. He is a member of Washington Native Plant Stewardship, the Cascade Cactus and Succulent Society, Northwest Mushroomers, and the Board of Governors for Sehome Arboretum in Bellingham. Alex is enthusiastic about increasing undergraduate interest and involvement in the Society. Alex McAlvay will formally accept his award at our 2011 annual meeting of the Society of Ethnobiology in Columbus, Ohio.