A Thank You Note

A Thank You Note

Dr. Steve Wolverton was recently awarded the Society's Student Mentor Award. Students from the SOE have begun an annual tradition of nominating and voting for someone who has inspired young academics in the field in ethnobiology. “ We want to recognize the support and encouragement we get from our mentors – not just for being good academics – but for nurturing us in a community that seeks to develop a strong scientific ethic for a socially and environmentally just future.”  The first awardee in 2015, Leslie Main Johnson is an SOE icon who has supervised and served on the committee of many SOE students. Both her and Steve were presented with the award at our annual meetings in 2015 and 2016 respectively. We strongly encourage students to nominate their devotees, without whom we would not be where we are today. In the spirit of the thoughtful relationship between our Society’s mentors and students we want to share this note from our beloved 2016 Student Mentor Award winner, Dr. Steve Wolverton from the University of North Texas as he reflects upon the academic relationship between mentors and mentees. 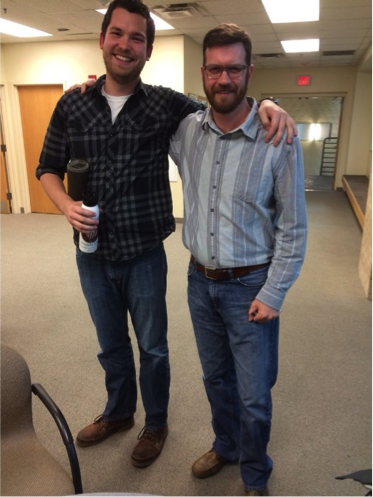 It is a very humbling experience to have been awarded the Ethnobiology Mentor Award this year at the annual meeting.  I knew that something fishy was going on because I kept bidding on a beautiful red basket at the silent auction.  Liz Olson (Conference and Awards Coordinator) kept ramping up the bid, and I really wanted it.  Then Paul Minnis pulled me aside and said, “Dammit Steve, stop bidding on the basket…”  “Why?” I asked, “I really like it.”  He cajoled me to trust him, and so I stopped bidding on it.  So, strange things were afoot, and I knew it.  But I did not believe that I had won the Mentor Award; in fact, when Janelle Baker (Student Promotion & Outreach Coordinator) began to read the excerpt from the nomination letter, which started with “Steve…” I began to know it was me, and it was really shocking and emotional.  The reason is that I really do care about students, but I am not all that selfless of a mentor.  Yet, somehow we have all managed to benefit from one another.  There are several things that I wish to point out in this letter of gratitude to the students who nominated me.

First, you do not realize how much I have benefited from knowing you.  In the most selfish way possible, your success fills me with complete satisfaction.  I greedily enjoy your success.  You see, when you grow it challenges me, and that is something I am hungry for.  So, it is not you who should be grateful to me, but I who should be grateful to you.  I know who you are. Your names are Jon, Traci, Amy, Andrew (twice), Laura, Evan, Christy, Chelsey, Alex, Janelle, Andrea, Preston, Kathy, Charles, Clara, Ashley, and many more.  I thank each of you for sharing your journeys with me.  I am honored to be your “frentor.” 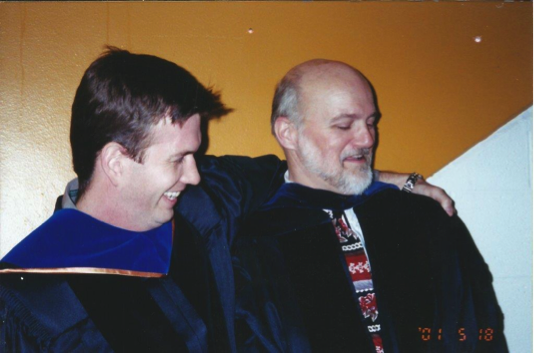 Second, when one is honored in such a fashion it clearly highlights in an immediate sense how much one has been given.  I have received (and continue to receive) exceptional mentoring from many people.  However, when it comes to my career there is one person who truly made the largest impact.  That person is Lee Lyman. Many people know Lee to be pointed in his criticism and somewhat grumpy in his demeanor.  Both are true, but there is much more to the story.  When I was in graduate school at Missouri, I needed a firm hand (sometimes the back of the hand).  I would not have finished without Lee’s firm boundaries; he simply would not put up with any disrespect, arrogance, or general stupidity.  And, at times, I was accomplished at any one of these.  But underneath it all, Lee was also exceptionally dedicated, patient, and kind. There are many examples of his kindness that I could share, but I will share only two and then wrap this up. 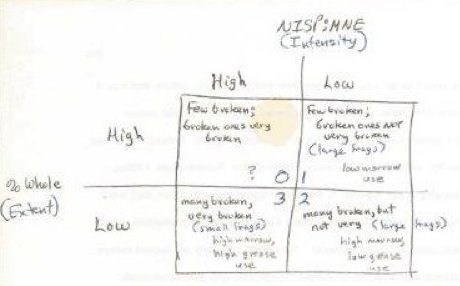 When I was working on my dissertation, I was regularly in Lee’s office discussing ideas, particularly on how to use measures of bone fragmentation to create test implications for studying marrow and grease extraction using zooarchaeological data.  I really worked at this, and I truly enjoyed it but also exhausted myself in the writing of the conceptual chapters of my dissertation.  During that time, I quite proudly came up with an elegant chart to display the test implications of the model I derived.  I would talk at length with Lee about this… I was so proud of what I had come up with… or least I thought I had come up with that chart (so enthused was I).  That chart has been published in two papers and used in a plethora of presentations and posters; again, quite proud was I.  Years later, in fact over a decade after I left Missouri, I was rummaging through my old faunal lab notes from my dissertation.  I ran across the original hand-drawn version of that chart.  My jaw dropped; the whole thing was in Lee’s handwriting.  I was thoroughly humbled as I recognized (yet again) the hand he truly has had in my life.  He never would have claimed those ideas, but they were at least as much his as they were mine… In my youth, my eagerness, I had not even recognized it.  I know that he does not care (he probably does not even remember it); but, he valued my enthusiasm more than he did credit.

More recently, Lee and I edited a book together through Arizona Press.  Lee laboriously edited a chapter by one graduate-student contributor and sent it back to me.  As was our practice I sent a clean copy of the revision to the student requesting them to consider the revision, and if acceptable, that we’d move forward to accepting the chapter.  The student was astonished at the improvements and wrote back to me stating that “whomever had done so much to improve it should be a co-author.”  I calmly replied, that Lee had done the work, stating “there is no need for you to offer him co-authorship because his reply will be that you someday will be in a position to help another student author, and that will be the best way to pay Lee back.”  I had no doubt that this would be his response to the request, so I did not forward it to him.  When I later told him about it, unequivocally he agreed that this would have been his response.

To finish, I will cherish this award not just because of the faith shown in me, but because of the kindness that other mentors have provided along the way.  I only recognize good mentoring now because I had great mentors, like Lee. Because of them, I focus my own mentoring on two questions: What is a student currently struggling with and why? And, what needs to happen to make progress? I know that the students who nominated me will pay this forward because it is their responsibility to do so.  This is what we do.