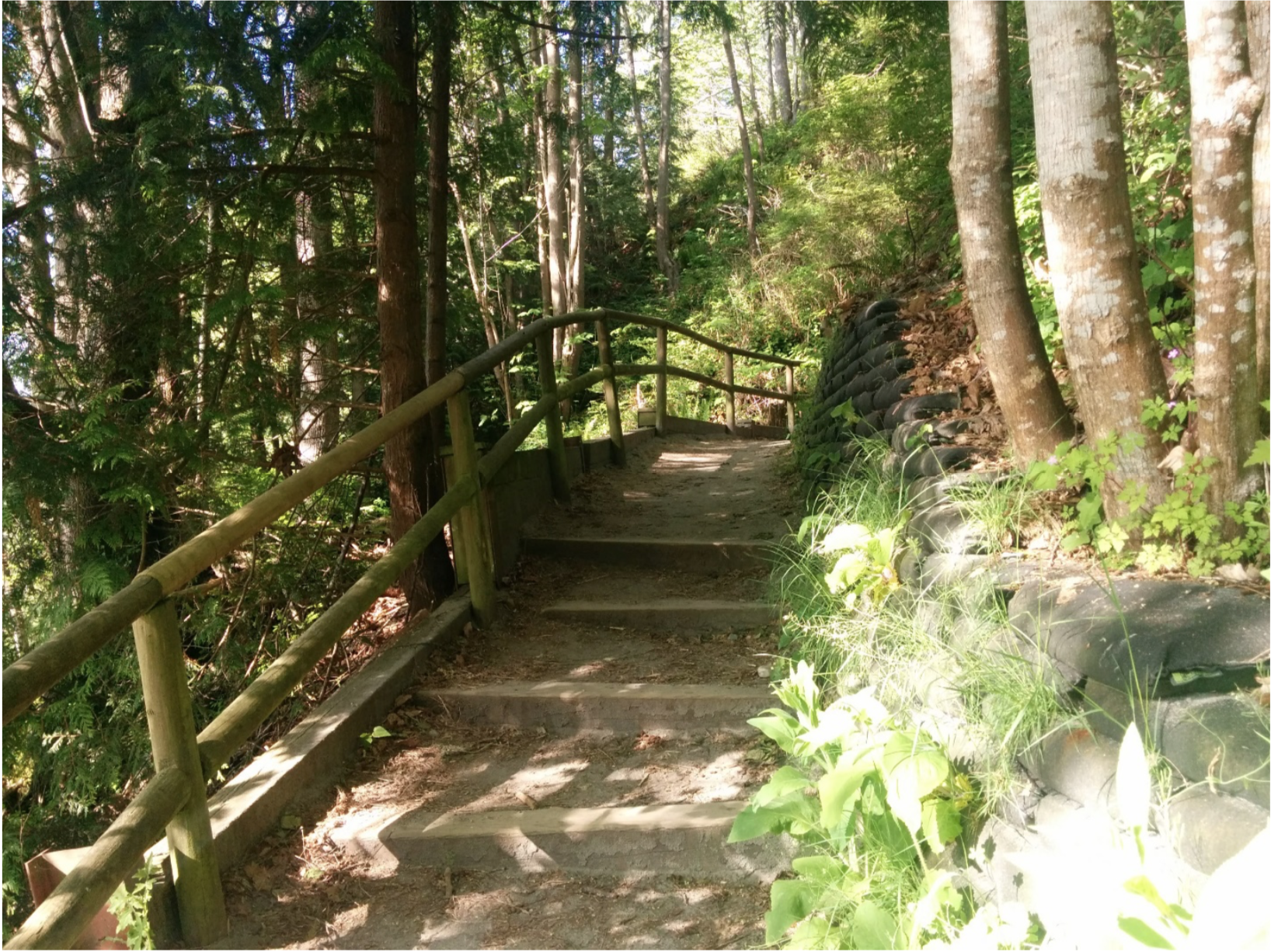 By Chlöe Fackler, Student Board member

It’s been a little less than a month following this year’s Society of Ethnobiology conference in Vancouver, BC, and yet I still find my thoughts drifting back towards the cool forests of the Northwest Coast. As a native Texan, and recent graduate of McGill University, I have travelled across much of North America, meeting new friends of all shapes and forms along the way, but never have I ever visited the Pacific Northwest! And now, as I reminisce on my experiences at this year’s conference in the traditional, ancestral, and unceded lands of the Musqueam people, I find it almost enticing to relinquish my ties to my beloved Texas borderlands and lose myself in those lush forests once again! While I would never actually betray my home, I do hope to return to visit the Northwest Coast very soon! 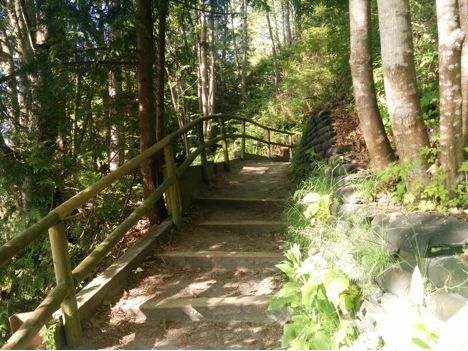 The conference began with a lovely opening ceremony at the University of British Columbia’s Museum of Anthropology, fronted by Vancouver’s Poet Laureate, Christie Lee Charles of the Musqueam Nation. Chief Kwax̱itola Henry Seaweed of the Nakwaxda’xw Nation, T̕łaḵ̕wagilag̱a̱me Robert Williams of the Dzawada̱’enux̱w Nation, Ma̱lidi Sydney Roberts of the Wei Wai Kum Nation, and Hereditary Chief Chester Lawson of the Haíłtzaqv Nation also represented and welcomed the crowd through story, song, and dance! There was even a surprise visit by Māori relatives from New Zealand! Pacific solidarity at its best! 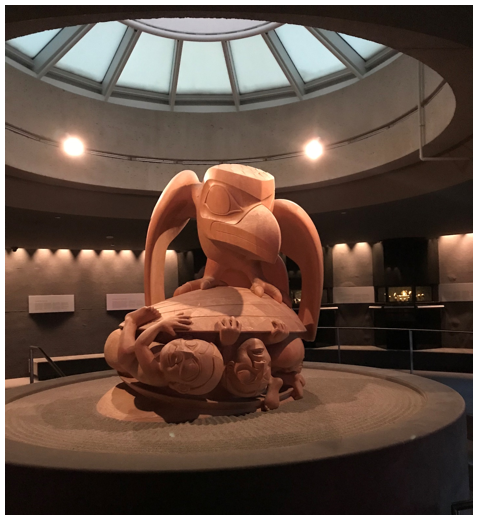 "The Raven and the First Men", on exhibition in MoA, carved by Bill Reid. Photo by Kali Wade.

Speaking of UBC’s Museum of Anthropology, it is a place worth checking out in detail! Most of the pieces were purchased or commissioned by the MoA from local First Nations communities along the Northwest Coast, but a few were also from other North American indigenous peoples and other peoples from around the world! My favorite pieces were the Kwakwa̱ka̱ʼwakwmasks, as well as the Inuit bows! So much dedication and accumulated generational knowledge goes into crafting both sets of objects, leaving the objects with a distinct character of the landscapes in which they were made and used! 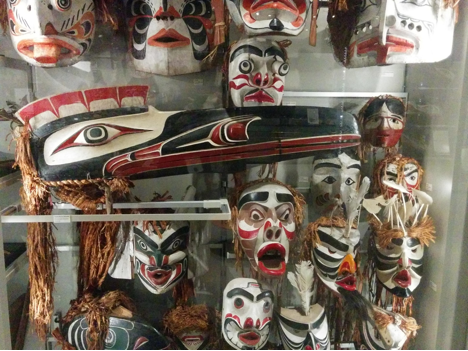 Kwakwa̱ka̱ʼwakwmasks, on exhibition in MoA. Photo by Christopher Wheatley 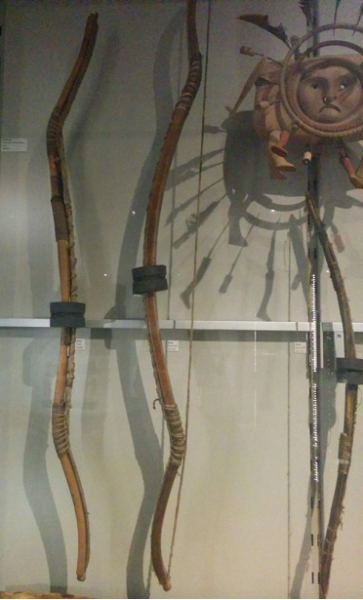 The sessions themselves were highly diverse and engaging, and while I had to spend much of my time running around to troubleshoot and film sessions for the Society archives, I really enjoyed all the ones I was able to attend. My favorites were Dawn Davis’s presentation Peyote Habitat Loss: An Examination of Threats Using GIS, and Dr. Karol Chandler-Ezell’s Midnight Llamas, Death Fish, The Devil’s Cattle, and Fear of Darkness in Ecuadorian Children’s Legends. I also had a lot of fun presenting my own work during the poster session, Eat the Weeds: Human Relations with Invasive Garlic Mustard (Alliaria petiolata) in the Lower Saint Lawrence River Valley. The poster session, as well as several other events, were housed in UBC’s First Nation House of Learning, which was a gorgeous structure in and of itself. Throughout the conference, people shared traditional foods and plants on a refreshments table, including a wonderful nettle, spruce, and rose tea, as well as crabapples and local seed potatoes! 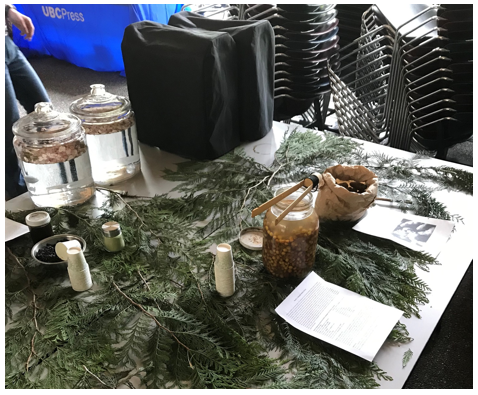 The student events held this year were really well attended! The student-mentor lunch had over a dozen mentors, with students clustering around their mentor of choice after a short introduction. I hung around Dr. Nancy Turner, this year’s Distinguished Ethnobiologist awardee, and listened to her stories about growing up in the area, in addition to her suggestions to other students on how to proceed with their careers. In the evening, we also had a student social at the local grad student hang-out, Koerner’s Pub, with great food and drinks all around! On my way there, I even met a new friend, who I initially believed to be a log of licorice candy: Arion ater, the Black Slug! However, after reading more about this species, I learned that they’re invasive in Northwest Coastal forests, which is too bad since they’re lovely creatures. I wonder if this species has any ethnobiological relevance anywhere? 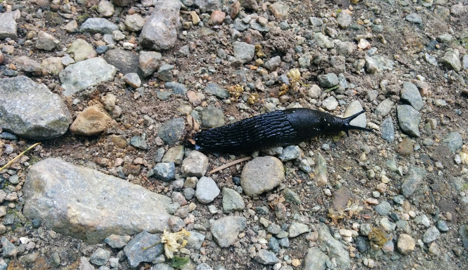 On Friday evening, numerous conference attendees crammed into tight school buses to attend this year’s conference banquet held at the Musqueam Reserve. Once we arrived we were free to look through the c̓əsnaʔəm exhibit concerning Musqueam cultural history in the region while waiting for food. Speaking of food, this banquet meal was something I was very much looking forward to. There’s no way I could have visited the Pacific Northwest without eating local salmon in some form, and our hosts did not disappoint! The meal was roasted salmon, salad, mixed wild rice, seasonal vegetables, and corn relish. It was amazing! For dessert however, a treat was in store. We had local berry mousse whipped out of soapberries, and even had the opportunity to whip soapberries ourselves! Some people at my table were not fond of the soapberry whip, and I’ll admit it was quite astringent, but I loved it, and hope to be able to grow some of my own someday to try this out again! Following dessert, Tsatsu Stalqaya, the Coastal Wolfpack dancers performed for us, which was really neat! They’re a family group, from children to elders, all participating in narrative song and dance. They even performed one dance in which the audience was able to participate, via a guessing game! It was a wonderful way to end the evening! While there were technically fieldtrips on Saturday, such as the Squamish food day trip, I was unable to go due to having to catch a flight home early the following morning. However, I later heard that the field trips were fun! 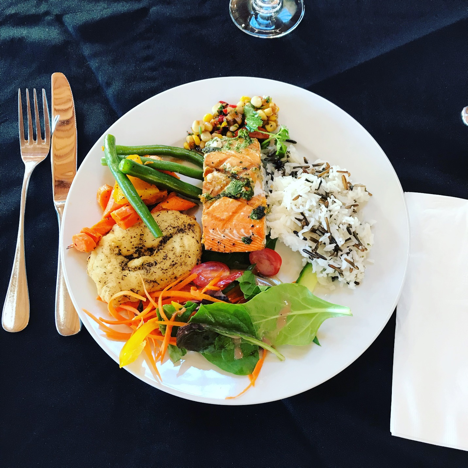 Dinner at the Musqueam Reserve Banquet. Photo by Kali Wade. 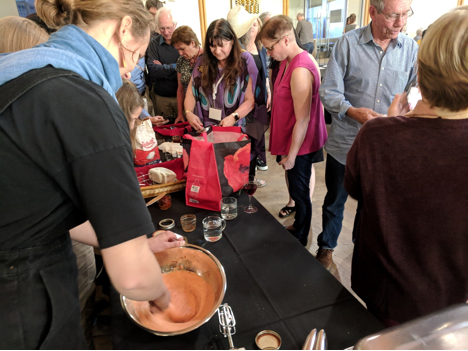 While I am saddened I was not able to spend as much time in the area as I would have liked, I am glad I was able to learn all I did and meet a bunch of new people, plants, fungi, and animals! I’m grateful for the opportunity to visit a new place, connect with and hear stories on the land, and build relationships that will hopefully form foundations that will last a lifetime. I’ll be sure to be back very soon! 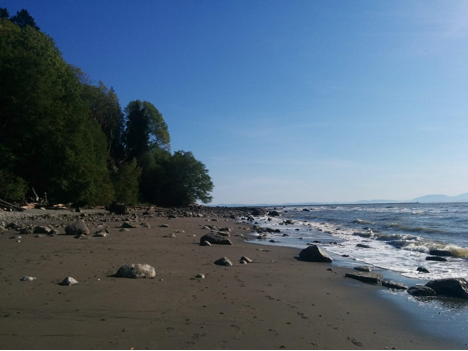 Chlöe Fackler is a recent graduate from McGill University, holding her BSc in Plant Biology and Anthropology. She is a native Texan, and will be moving to New Orleans to eventually begin graduate school, with aims to understand how the relationships between people and plants change over time in the face of human-driven ecological disruption within the Gulf South. She is a member of the Society’s student board, and hopes to become increasingly involved as time goes on!