On Point (And Not NPR): Ancient Tattooing in the Southwestern United States

On Point (And Not NPR): Ancient Tattooing in the Southwestern United States 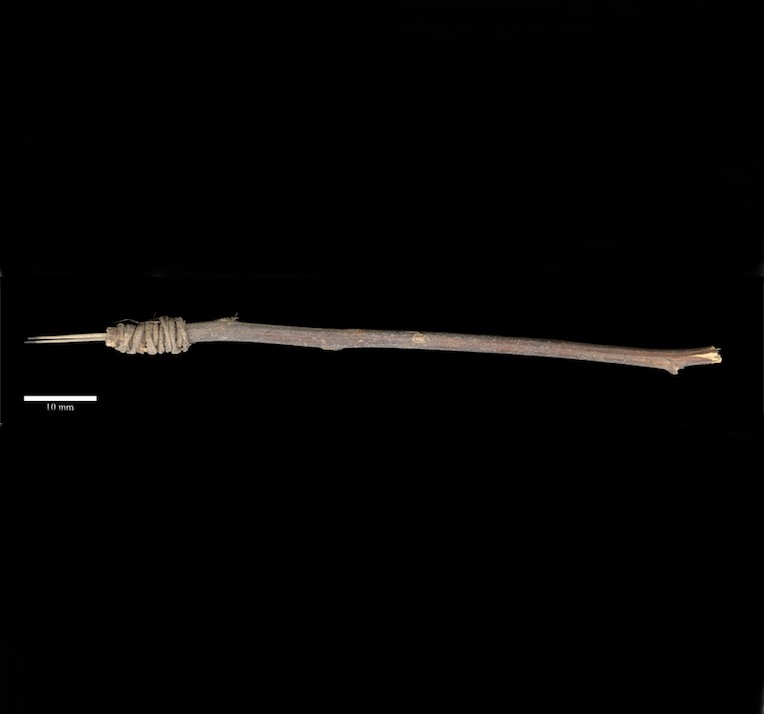 By: Andrew Gillreath-Brown, a current PhD Candidate in the Department of Anthropology at Washington State University. Twitter: @andrewwbrown; Instagram: @computational_archaeologist  and Aaron Deter-Wolf, the Prehistoric Archaeologist for the Tennessee Division of Archaeology, and runs the tattoo archaeology Instagram: @archaeologyink

Ethnographic literature from the southwestern United States provides us with early descriptions of Native American tattooing practices and tools including hafted, bundled, and individual cactus spines. Cactus spines were used by at least 21 Indigenous Peoples throughout the southwestern United States (Utah, Arizona, New Mexico, Colorado) and California (Gillreath-Brown et al. 2019; Krutak 2014). Prickly pear cactus was one of the most common types of cacti used for tattooing, which is documented among at least 9 Indigenous Peoples in the region. Most of the cactus spine tattoo tools are multi-pointed (two or more spines). Tattoo inks varied across the region, and included materials such as charcoal (from many different plants), red and black minerals, red clay, plant pigments, iron, and red ochre.

Ethnographers also detailed some tattoo designs, such as among the Hualapai, where Alfred Kroeber (1935) recorded various facial tattoos on women’s chins, foreheads, and cheeks (Figure 1). Edward Gifford (1933) provides different women’s chin tattoos for the Cocopah (Figure 2). For the Cocopah along with other Indigenous Peoples of the American Southwest, women would get tattoos around puberty, marking them as having entered adulthood. Tattoos also had many other uses, ranging from medicinal to mourning rites. 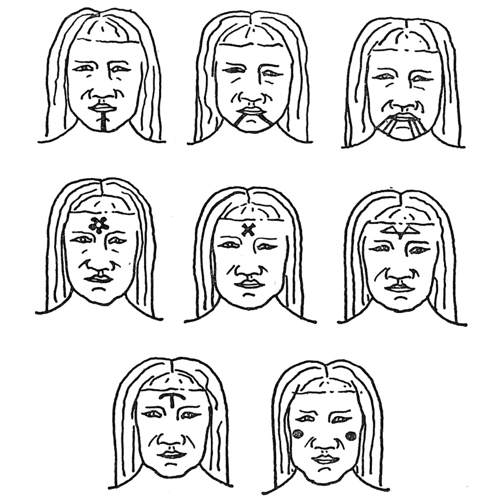 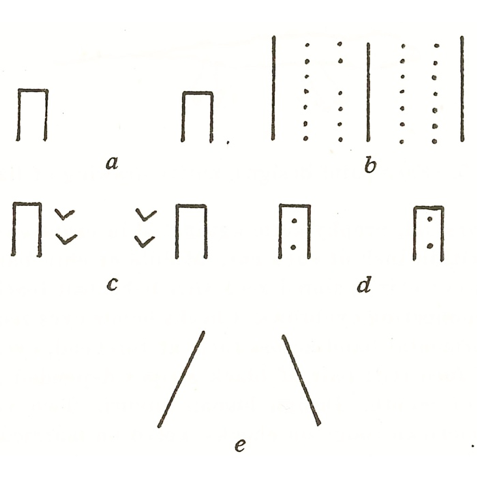 How old is the practice of tattooing in the southwestern United States? Well, around 2,000 years ago, the Basketmaker II (500 BC – AD 500) people of the Turkey Pen site in southeastern Utah (ca. AD 79–130; part of the Greater Bears Ears Landscape) used a small tool to handpoke tattoos (Figure 3; Gillreath-Brown et al. 2019). That artifact measures just 9.96 cm long, and is made of a lemonade sumac twig, yucca leaf strips, and prickly pear cactus spines, which are stained black on the tips. Several taxa, such as lemonade sumac, narrow-leaf yucca (Yucca angustissima), banana yucca (Yucca baccata), and various cacti [e.g., prickly pear (Opuntia spp.) and hedgehog cactus (Echinocereus spp.)], are common around the site (Camilli 1975; Matson 1991:95; Matson et al. 1990)

Archaeological excavations of the Turkey Pen site in 1972 yielded a lot of well-preserved materials, including, but not limited to, turkey and human coprolites, plant remains, corn, human hair, bone, wood, dried fruit skins, feathers, and rope/twine, of which the collection dates to approximately AD 1–200 (Figure 4). The Turkey Pen site is a large dry rockshelter, which led to the excellent preservation of the artifacts at the site. The collection has been studied and curated for the last 40+ years at the Washington State University Museum of Anthropology. 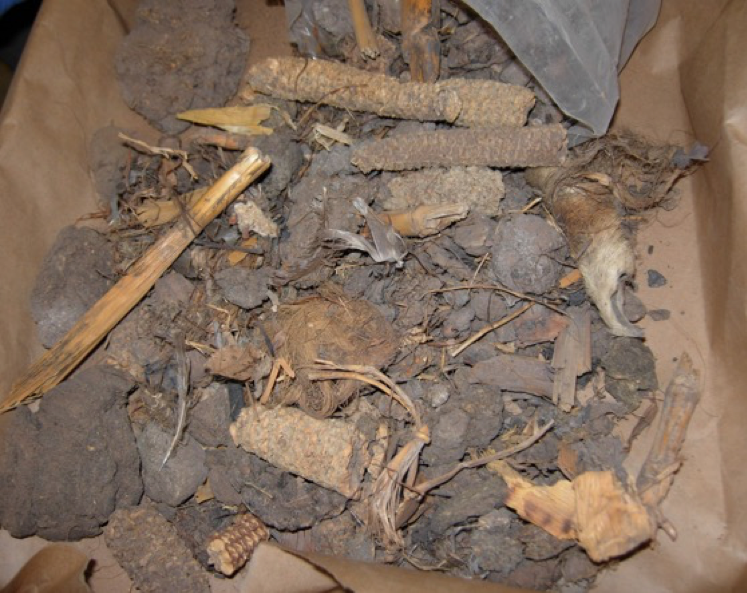 When working for the Museum of Anthropology in the summer of 2017, Andrew ran across the cactus spine artifact while documenting and cataloguing the Turkey Pen materials. It had not been previously identified as a possible tattoo implement, but aroused his suspicions based on the size, shape, and pigment staining. To study the tool, Andrew assembled a team of scientists (mostly archaeologists) with specializations in ethnobotanical (plant) remains, ancient perishable materials, ancient residues, microscopy, archaeologists who excavated the site, and Aaron, an expert on ancient tattooing.

To test our hypothesis that this artifact was used to tattoo and to learn more about how it was made, we undertook a series of examinations. We used a variety of methods to study this unique, perishable artifact, which consisted of high-resolution microscopy, X-ray analyses, and experimental tattooing (Gillreath-Brown et al. 2019). Our research led us to identify the tool from Turkey Pen as the oldest tattoo tool found to date in the southwestern United States, ca. AD 79–130 (Gillreath-Brown et al. 2019).

Microscopy allowed us to identify the taxon of cactus spines (turned out to be prickly pear cactus) and to be able to compare the artifact to experimental tattooing results. The X-ray analyses showed that the black staining on the tips was likely a charcoal-based ink. We could also see that one spine was broken off at the tip (Figure 5), and was 0.47 mm shorter than the other. The black staining covers the broken surface of the spine, showing that it broke during use. 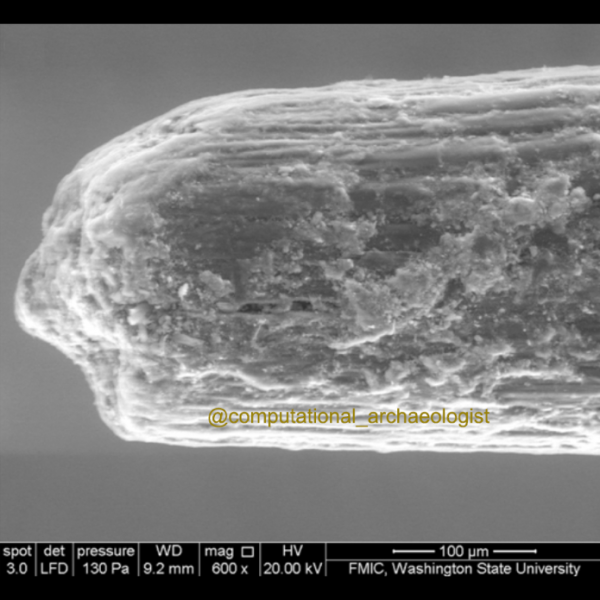 To better understand wear patterns on the artifact, we created replicas of the tool and used them to tattoo pig skin (see video below). That process successfully duplicated patterns we saw on the Turkey Pen artifact: rounding of the tip, creating striations, stripping of barbs, and embedding of pigment in the spine surfaces to about 2 mm from the tip. A tip on one of our experimental tools even broke at the same place as the shorter artifact spine.

Basketmaker II people of the southwestern United States were known for their skillfully woven baskets and also had some of the earliest dependence on corn. The Basketmaker II period also had spectacular rock art panels, which show some potential body decoration (Figure 6). 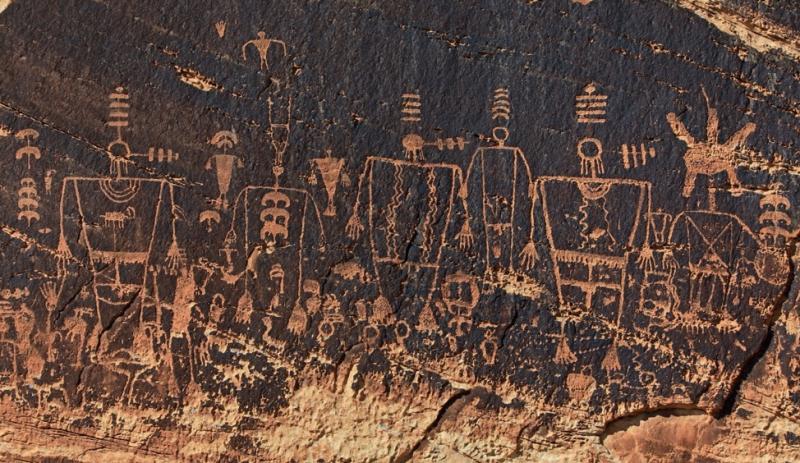 But what types of designs were people tattooing 2000 years ago? That is a very difficult question to answer, as nobody has used modern methods to try to detect tattoos on mummified remains from the American Southwest. We can look to different artifacts for potential options of tattoo designs. Decorated ceramics and effigy vessels from throughout the Southwest depict individuals bearing painted (like the human effigy in Figure 7), incised, and punctate designs on their bodies and faces. Basketmaker III (AD 500–700) unfired clay figurines also show some possible body decoration (Figure 8; Morss 1954). The incising of clay figurines even extends back to the Early Archaic period, ca. 5600–5000 BC (Coulam and Schroedl 1966). 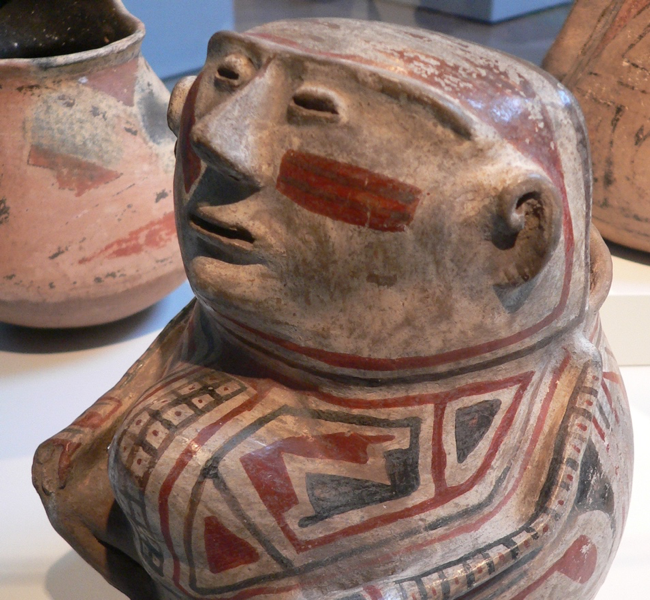 Some of the markings on ancient ceramic art and figurines from the southwestern United States are similar or at least have similar positions to the tattoos we see on female chins in the historic record (Sprehn Malagón 2001:68). So, although it may be tempting to immediately interpret those ancient depictions as tattoos, it is really not possible in most cases to conclusively demonstrate that these are tattoos (Deter-Wolf and Krutak 2018:7). It is ultimately difficult to determine whether these designs might represent tattoos, body paint, clothing, and/or other forms of body decoration.