My Weekend Get-away With an Ethnobotanist

This story is mostly true, based on real adventures and real ethnobotany. As it evolved, the characters took on different and this made it even more fun to write than the usual journal entries I make on my trip.

My friend is a naturalist for a living, and Ethnobotany is her passion. She has also been known to forage, collecting mushrooms and acorns seasonally every year. Outings with her are adventurous, sometimes sketchy, and never dull. When she asked me to go out to the desert for a weekend this summer, I said “sure”. Even though in my head, I was thinking “Are you crazy, It’s going to be bloody hot in August!” “Yeah”, she said, “I was looking at the forecast, and if we go now, we might see thunderstorms.” I was hoping to get out of the California air, smoky from wildfires. We drove 7 hours East to the Mohave. Arriving in the evening, it was in the nineties, but finally the air seemed less smoky. The birds were singing, the jackrabbits running by, and the shrubs were green from recent desert monsoon rains. When I commented on the heat, and wondered what it would be like in the middle of the day, she said “Don’t worry, when it gets hot, we’ll drive up the mountain to see the Joshua trees.” She knows I love Joshua trees (Yucca brevifolia jaegeriana) and the Pinyon-Juniper forest (Juniperus californica, Pinus monophylla). We fell asleep to a cacophony of birds, coyotes, and stars. 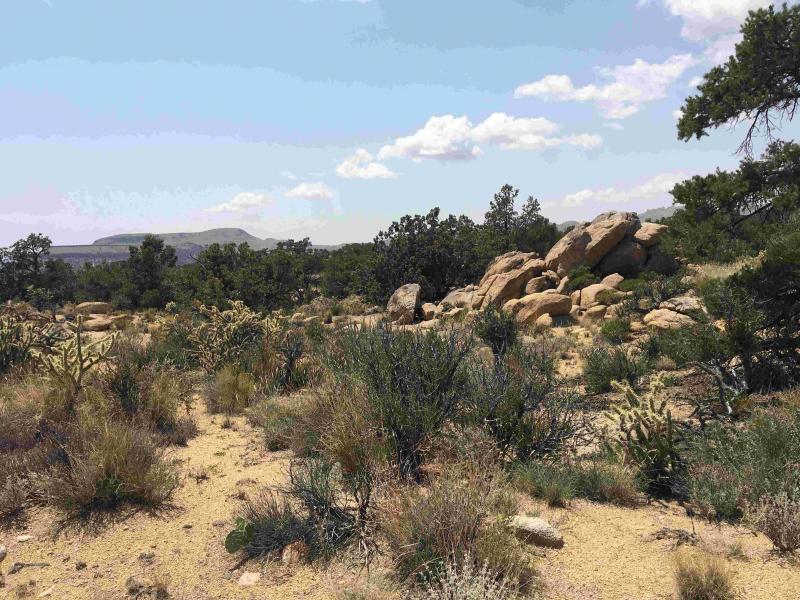 In the morning, I was dismayed to wake up smelling smoke and feeling stuffy. I mentioned the reaction of my sinuses to the drifting wildfire smoke, and regretted not bringing my usual pharmacy in a bag. “Oh, I know just the thing to help with that,” She said. “Of course you do,” I thought. “I’ll make you a tea. Look, there’s Ephedra nevadensis right here next to the campsite, and Salvia dorii to make it taste better. Usually, I would use desert lavender (Hyptis emoryi), but this is close enough. “ “Sure, why not,” I thought. “As long as I get my coffee too, I’m good.” The tea wasn’t bad, kind of good actually, and I did feel better.

After a little breakfast, we went out for a hike, through a wash with some sourberry (Rhus aromatica). “These shoots are split and used for baskets by many tribes in the west, and I love the smell of it when I am splitting them. Some people don’t like it.“ She cut off a piece, and gave it to me to smell. It smelled good. A few steps later, she gave me some creosote bush to smell, “They call the desert “nature’s pharmacy” you know. This creosote (Larrea tridentata) is very medicinal. You only use a little. And I’ve heard that sometimes you drink a little bit of the tea to prepare the body for the next medicine.“ “It sure smells medicinal,” I said. 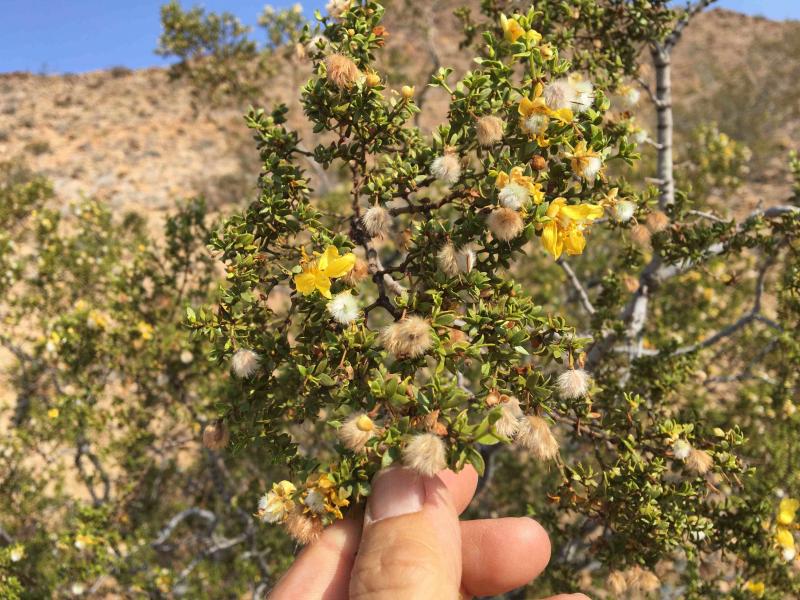 Arriving at some petroglyphs, she pointed out the tobacco (Nicotiana obtusifolia) growing around the base of the rocks, “Cultural botanical artifacts,” she said. “Indicates a cultural site, where the tobacco was used ceremonially.” Hmm, O.K., I thought. It made sense to me although I’d never heard that before. 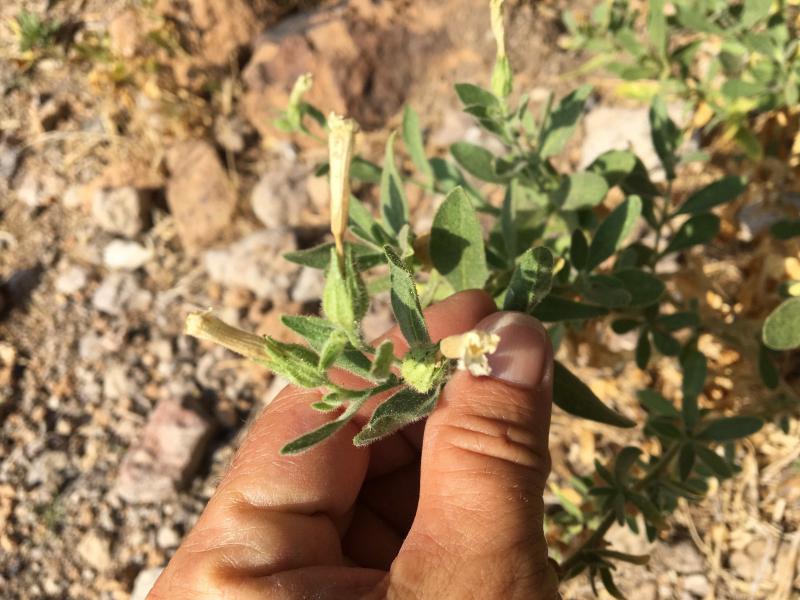 Down the trail, we stopped to look at a short barrel cactus (Ferocactus cylindraceus), and she stooped to look at the top more closely. “Hey look, the little antelope ground squirrels must be harvesting the seeds out of these cactus fruit. Half is chewed off, and the fruity flesh is gone. I bought some barrel cactus seeds at the Native Seeds Search store in Tucson at that conference a few years ago. I’ll just put a few in my shirt pocket to take home, along with a little bit of this really aromatic little yellow composite plant. It smells so strong, it’s got to be good for something!” “Ah”, I thought. This is why her house is filled with strange jars of leaves, and envelopes of seeds, and plant material.” The hike was beautiful, but it was starting to warm up. We got into the truck and started up the mountain. 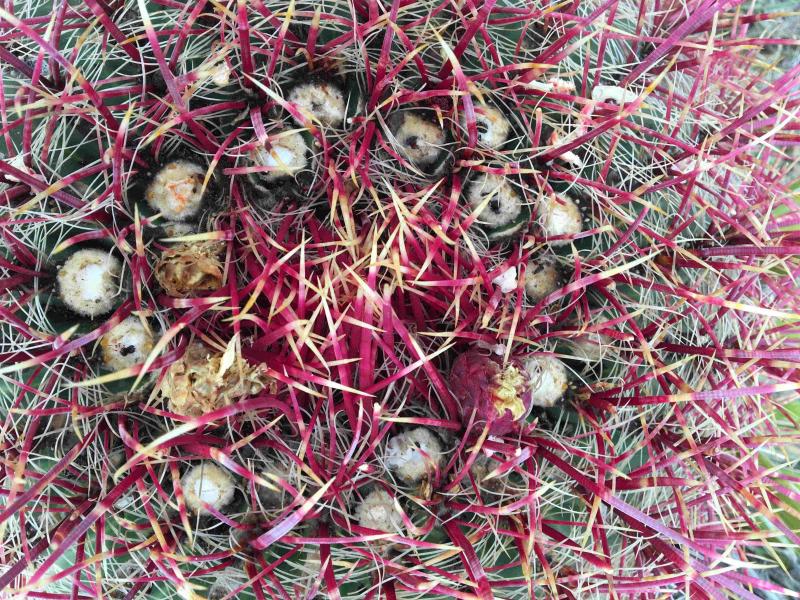 As always, along the way, we stopped occasionally to get out and look at plants. At one point she pulled out tongs and a small bucket and collected cactus fruit (Opuntia chlorotica). “I want to compare the flavor of this species with the one near the campground,” she said.” It sounded good to me, I remembered having delicious prickly pear margaritas in a restaurant in Phoenix. 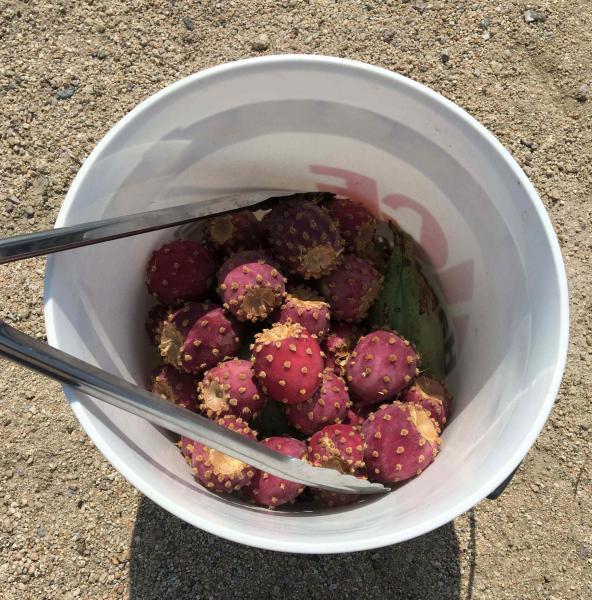 “Over here is where we found those wild turnips, Cymopteris, a few years ago.” She said as we reached the top of a rocky butte. I remembered a lot of digging for a tiny little root that had very little flavor. We also stopped to pick up some yucca leaves (yucca schidigera, yucca baccata) that had fallen into the road some time back such that the fibers were falling right out of them because of vehicles driving over them. I made yucca string for a little necklace one time at a basket weaving class she was teaching. We also stopped and gathered some Banana yucca fruit to bake when we got home. Now that is a delicious forage food- nice and sweet!

This was a typical day with her picking up stuff along the way, as we travelled along the dirt roads through the wilderness and ancient landscapes. Then the not so typical event happened. We had stopped at some juniper trees, some of which were dead to get the bark for fire making. I decided I would show her my wilderness savvy by bringing my brand new hydration pack to make sure we had water as we walked farther from the car. To remove the zip tie packaging, I pulled out my brand new and very sharp camping knife. Surely, she would be impressed. Just as I was putting the point into the tie, a thought flashed through my head, “Maybe I should be a little more cautious about this angle---Oh No!!!” I cut a big slice right through the meat of my palm. I didn’t want to say anything, or interrupt her gathering, but I was bleeding heavily so I had to ask for help. My pride quickly changed to embarrassment. We might have to cut the trip short and drive two hours for stitches. She told me to hold the edges of the wound together. We would have to wait a couple of minutes and see if the blood would stop flowing. Luckily, I am a good clotter. “We need to put something on your hand to kill the germs. I know, I’ve got piñon salve from the last Ethnobiology conference.” We wiped off the blood, and when she put on the salve, it hurt so much! I couldn’t believe how much it hurt. But the salve seemed to do the trick. It didn’t get infected, despite the lack of proper cleaning or running water. It throbbed during the night, but it felt fine the next morning. She had put butterfly bandages on that held the wound closed, and I told her that I did not want to change our plans, because I thought it would be OK. We continued our weekend with less adventuring off the paved roads, and more drawing and writing at the campsite.

I did end up with a scar, but I learned a lot about plants along the way. I had been so excited about what I was seeing, that I was not careful. Exuberance and sharp knives do not mix well. Even though it was almost a very bad situation, I would never give up adventuring in the desert. The unpredictable, unknown, and sometimes dangerous wilderness experiences make me feel alive. Being out there is the most sacred and spiritual part of my life.

Cathy Chambers is a naturalist for the Kern County Superintendent of Schools in California. She has been teaching children about ecology, plants and their native uses for over 20 years. She holds a bachelors degree in Anthropology from the University of California, San Diego with an emphasis in Native American Studies. She has been active in the California Native Plant Society. She has been volunteering at the herbarium at the California Polytechnic State University in San Luis Obispo, both curating and mentoring Ethnobotany students for over 5 years.