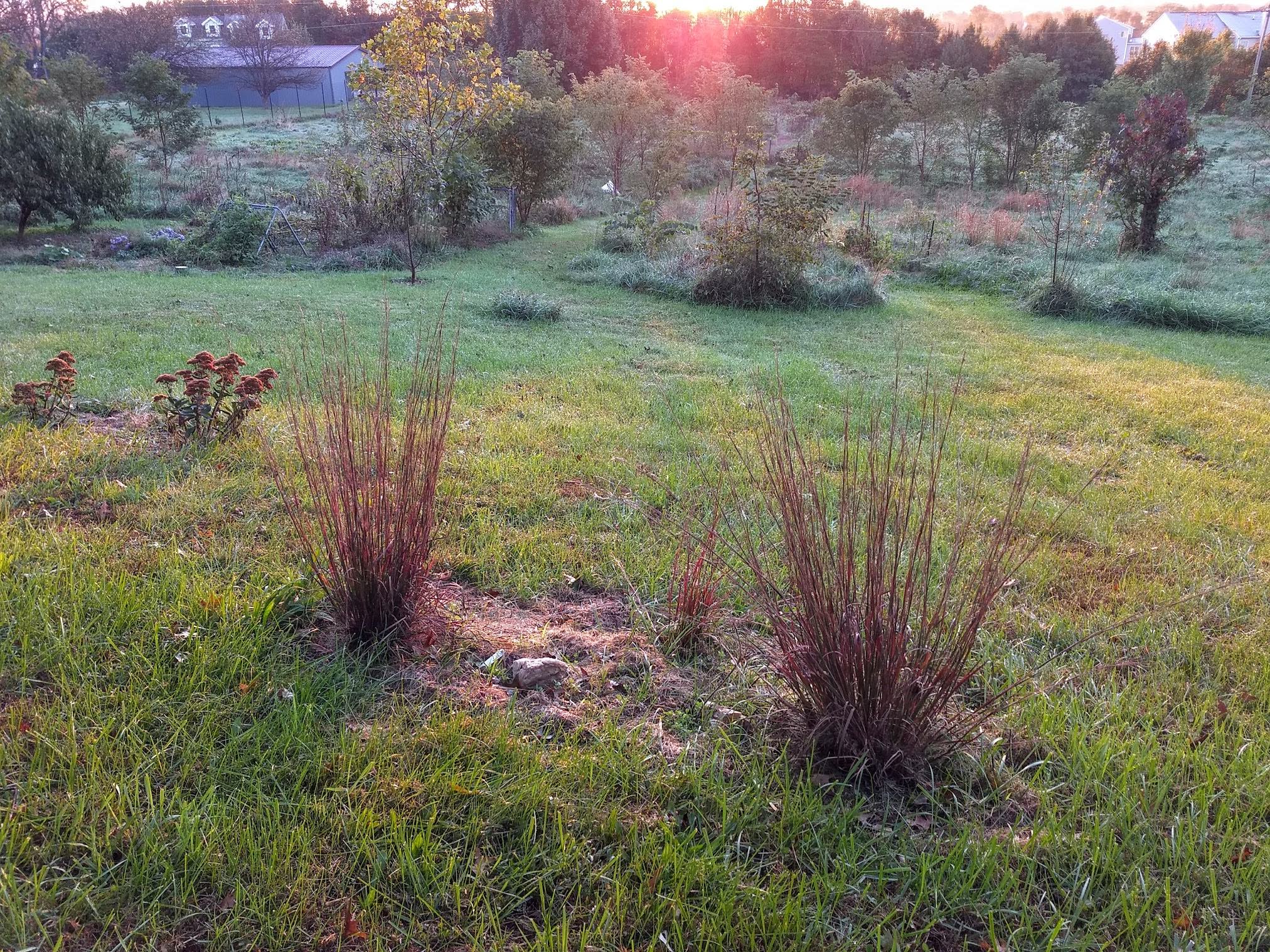 In January I posted about Landscape for Life, a curriculum to increase awareness among homeowners about how their landscaping practices impact the environment. This post is about my efforts to reduce our own environmental impact by converting our three acres from mostly lawn to mostly woods. This is a chronicle of what went well and what I wish I’d done differently along with some musings about the project. 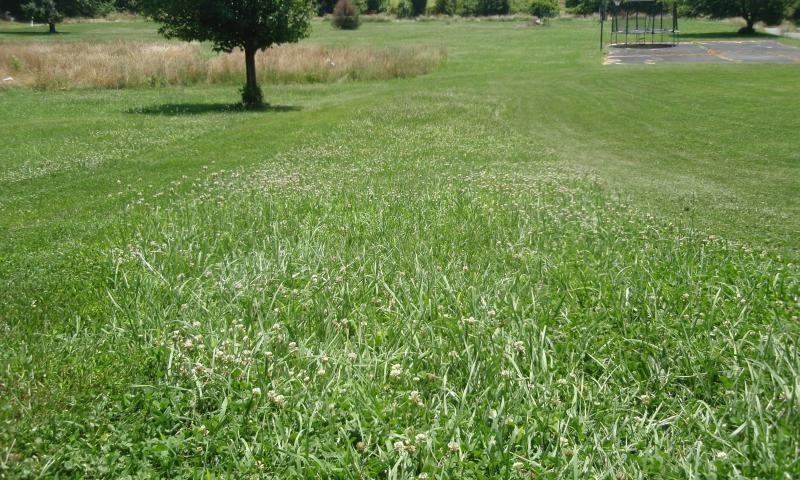 Fig 1: The “Before” picture, lots of lawn. At top left you can see one of the attempts at allowing some lawn to grow up into a meadow. Without the deer fence, the meadow simply attracted more deer and they bedded down in the grass causing it to look bad. 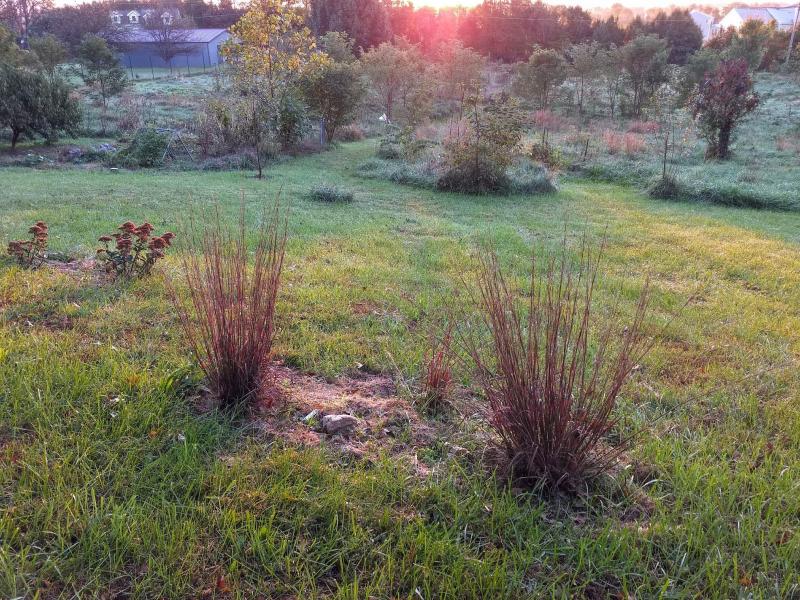 My goals for the project were to 1) reduce lawn and increase tree cover 2) provide habitat for pollinators and other wildlife and 3) plant trees and shrubs that provide food for us, and 4) in general restore ecological processes and increase biodiversity over the long term compared to a lawn. It’s an experiment in ecological restoration or regeneration.

In 2016, we had 700 native tree and shrub seedlings planted. This planting was designed and the species chosen by an urban forestry graduate. Mostly pioneer, or early-successional, species were chosen. These are the fast-growing weedy species that sprout up when a lawn or field is abandoned. These species are adapted to disturbance—in this case, the “disturbance” was keeping the area in hayfields or crops, then more recently in lawn grass, both of which are unnatural and therefore require human inputs to maintain. Keeping the land in mowed lawn is said to be “halting” succession, because nature doesn’t “want” to keep an area in lawn (Michael Pollan’s book Second Nature has an entertaining discussion of this). While we could have just waited to see what would eventually grow from the seed bank when we put up a deer fence and stopped mowing, we decided to jump-start the process by planting the seedlings. Eventually these species may give rise to another stage of succession. The hope is to eventually have a woodland of oak and other native species with still keeping some edge or open areas for trees and shrubs like persimmon and elderberry. 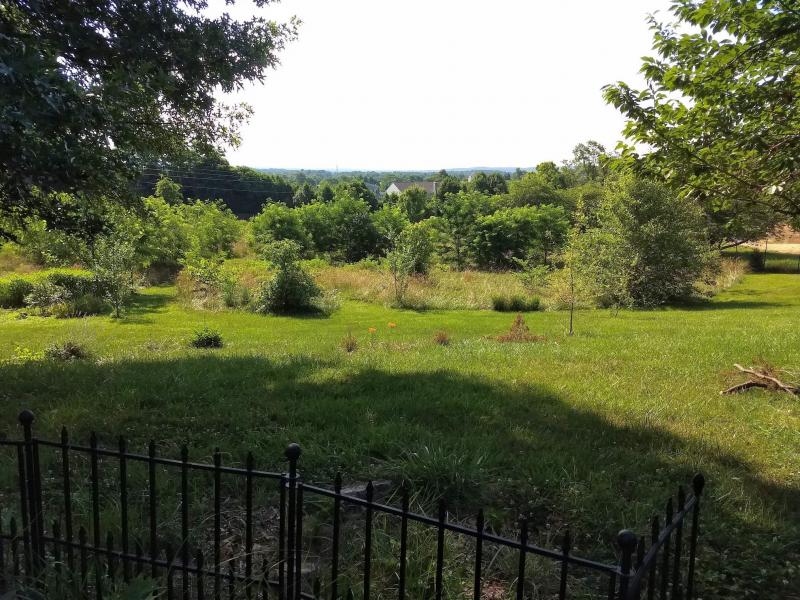 Fig 3: Three years into the project. Most of the trees you see are the fast-growing black locusts. Other visible trees are those that were planted, or protected as volunteers, before 2016, including river birch, pin oak, and maple. Also young heirloom apple trees are visible on the slope that is still in lawn. 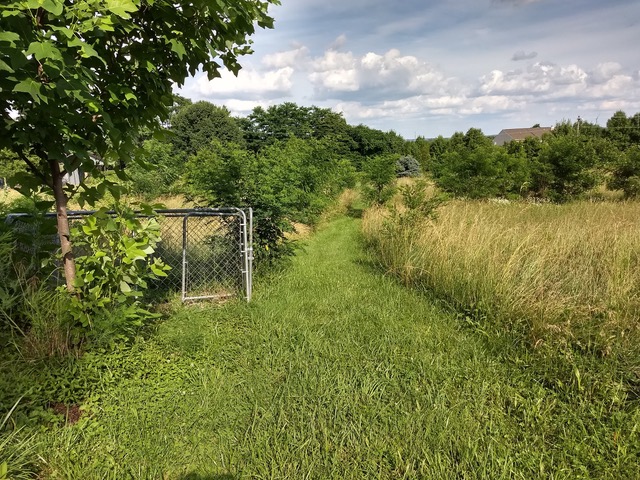 Fig 4: Fourth summer. Paths indicate that an area is being tended, and that the wild and weedy look is purposeful rather than a sign of neglect. (Not sure if the neighbors are convinced or not.) This is emphasized as we encourage people to let their landscapes be less formal and to incorporate native plants. On the left, one of many volunteer tulip poplars (Liriodendron tulipfera).

We had the whole area fenced, because it would not be possible to do this project without fencing. Even when these trees get above deer-browse level, it will be important to keep the area fenced because “good, sustainable forestry is near impossible when white-tailed deer populations are high, because native forest regeneration is often inhibited by their browsing,” according to the Piedmont Environmental Council. Otherwise, the forest will eventually consist of just those trees that the deer don’t much like, many of which are the invasives. It is said that this is why we have so much native pawpaw in understories—deer don’t like the strong flavor of the leaves. Deer predation lessens biodiversity. Over the years I’d also protected and moved some red cedar (Juniperus virginiana) volunteers, because they naturally sprout here and are the iconic species of oldfields here. Also, they are so prickly when young that deer avoid them so I could grow them even without fencing them. I was advised to cut them down to avoid having cedar-apple rust infest the heirloom apple orchard we were also putting in. I regret having done that, as a field growing up in red cedar looks like a natural progression to me.

Unfortunately, the fence also lessens biodiversity, because foxes, for example, can no longer come onto the property. It seemed that the tick population went way up the first years after fencing. It occurred to me that if the foxes and other critters that eat the white-footed mice were now fenced out, that the tick population infected with Lyme might go up. I am hoping that increased biodiversity and enthusiastic hawks will eventually bring the mouse population down. Everything is a trade-off. 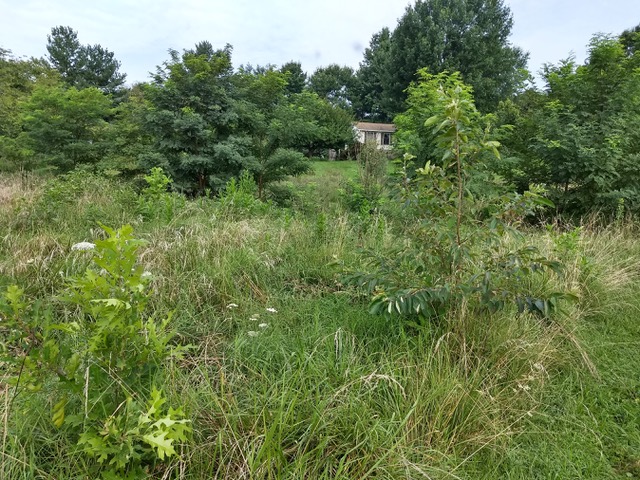 Fig 5: Persimmon, Diospyros americana and volunteer pin oak (Quercus palustris) (lower left) growing among the fescue and weeds. Black locust trees (unfortunately, planted in clumps, because they are nitrogen-fixers). No persimmon fruits yet!

In last month’s Forage! post I mentioned that Landscape for Life emphasizes the concept of “ecosystem services”—stuff nature does for us for free. (For ecosystem services specifically from increased tree cover see “The benefits of trees for sustainable and livable communities.”) Ecosystem services that I’ve observed to be on the increase since stopping mowing and planting the trees include better soil moisture retention, more habitat, especially for pollinators, more shade (“mitigating the urban heat island”), and more fruit (see photos of my husband’s enthusiastic foray into elderberry-jam making).

I’d also like to think the trees and soil are sequestering carbon, but from my reading it seems this is still controversial (I would be interested if anyone has information about whether yard-size tree plantings, if we could get large numbers of people to do that, could have any effect.) In any case, avoiding negative externalities by using less gas and producing less greenhouse gas emissions by mowing less is another ecological plus.

Table 1: The legumes black locust and redbud were chosen specifically because they have symbiotic bacteria that fix nitrogen in the soil. I chose black gum and sweet gum for their fall color. I had previously planted, or protected volunteers of, other native trees as well such as pawpaw (Asimina triloba), pin oaks, spicebush (Lindera benzoin) and witchhazel (Hamamelis virginiana). 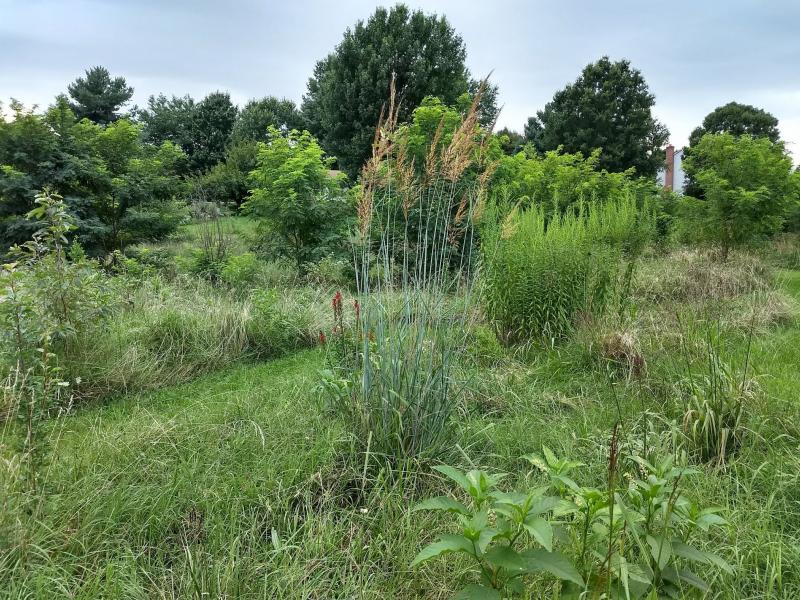 Fig 6: Most native plant enthusiasts in my region who do a lawn conversion choose to make a meadow. I thought that it made sense to plant a woodland, since that’s what would grow up here naturally. Meanwhile I have plenty of meadow! Here is Indian grass, Sorghastrum nutans. I was thrilled to find it sprouted two years ago from some seeds I’d collected from a roadside. However, I’ve recently been told that it’s now considered somewhat invasive, and native plant enthusiasts are now discouraging people from planting it. This has happened with several of the “natives” that are probably natives of the prairies more than they are from the East. As we provide them with open landscapes and encourage them, they have a tendency to take over, perhaps just as a non-native invasive does? This blurs the black-and-white distinction between natives and invasives. Also visible are bee balm, Monarda didyma; goldenrod, Solidago sp.; young pokeweed, Phytolacca americana in the lower right; a Bradford pear sapling lower right; and lots of black locusts and fescue.

The trees and shrubs were planted as bare-root seedlings. It was explained to me that this is the most efficient way to plant trees, because of transplant shock. I didn’t have the energy nor did I want to use the water to irrigate 700 trees. By planting 700, we could afford to lose a lot of them. Planting bare-root seedlings is also cheaper way of doing it, and I like to think it’s the mindful path of landscape change. After planting, one application of a selective herbicide that targets monocots (e.g., grasses, while not harming the trees and shrubs) was made around the seedlings.

It’s funny; even these two minor maintenance activities, watering and killing grasses, which compete with trees, can backfire. Watering trees seems to attract even more voles to gnaw on roots and trunks—I’ve lost transplants this way. I assume that voles or other gnawing and chewing critters can sense the area that’s been watered and are drawn to it. Also, the herbicide application kept some of the fescue and other grasses away from the seedlings, but, as always, when we leave a vacuum (a disturbance), weedy plants take advantage of that. I found a lot of weeds, such as prickly lettuce, growing right around the trees during the second year. Unfortunately, I went out of town and then found that prickly lettuce had taken over huge swaths of the area! Everything we do has multiple impacts. 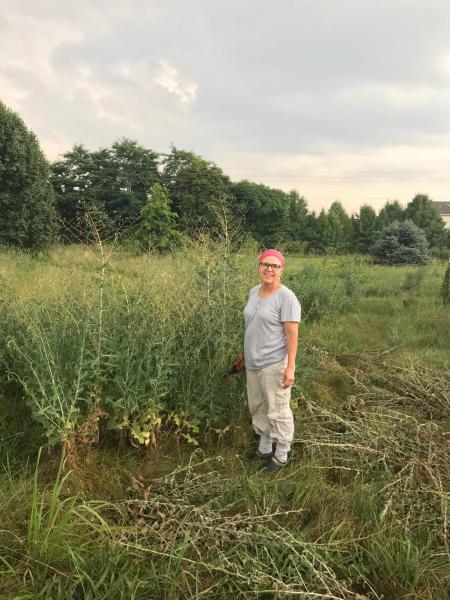 Fig 7: When thousands of prickly lettuce plants took over. 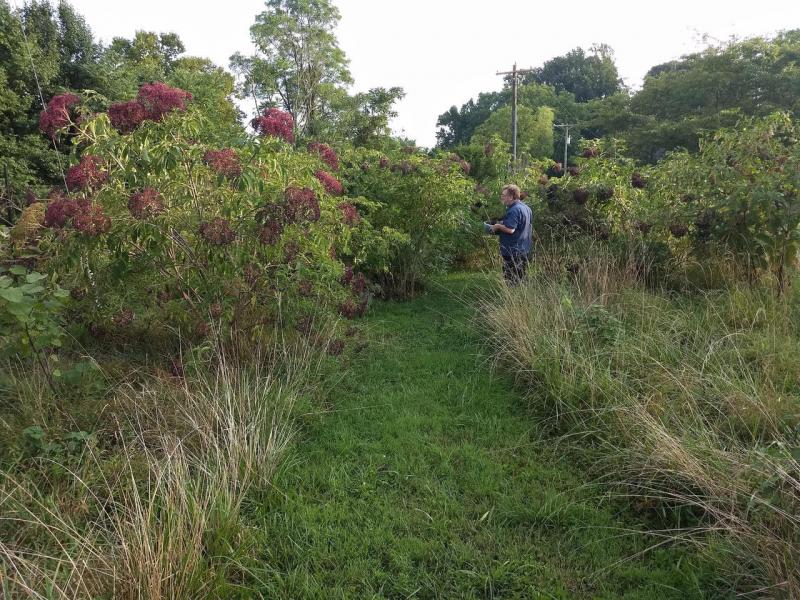 Fig  8:  My husband made good use of all of the prolific elderberry bushes by taking up elderberry-jam making last summer 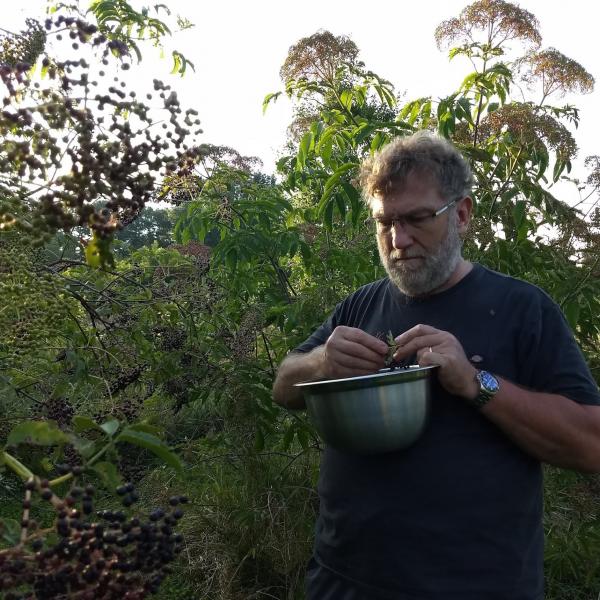 The main job I have in the yard is controlling invasives. If left to its own devices, the yard would quickly be overtaken by Bradford pear (if you don’t know the story of Bradford pear, it’s worth reading) mile-a-minute (Persicaria perfoliata), tree-of-heaven (Ailanthus altissima), and oriental bittersweet (Celastrus orbiculatus). And every year there is more Japanese stiltgrass (Microstegium vimineum). One could argue that these invasives are in fact our early successional species now. Thoughts like this are often on my mind as I go around hacking and squirting the alien invasives—what would happen if we just let them go—would they eventually settle into a new equilibrium with other species and be less invasive? Emma Marris discusses this in her book Rambunctious Garden. 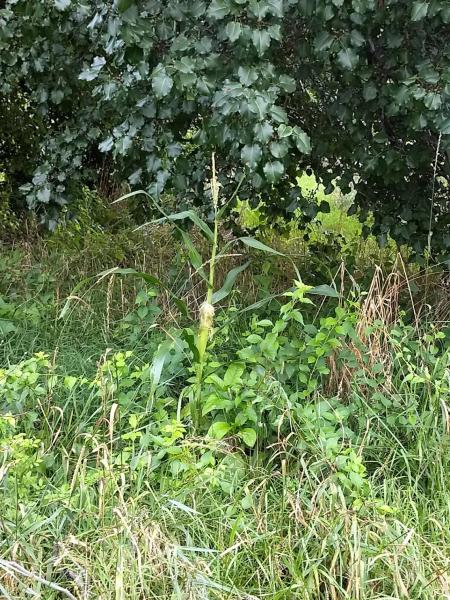 Fig 10: Weediness. Bradford pear is a weedy invasive (though this one clearly was planted as an ornamental years ago) as is oriental bittersweet, the vine growing all around the corn plant. The corn plant is a volunteer growing far from the garden. Like weeds, it likes to follow humans and our disturbed areas around but unlike the other two, it is desirable.

Invasives, like all weeds, are adapted to disturbance, whether human or natural. I’ve wondered what, if anything, separates “invasives” from other weeds, and I think it must be the extent of the damage they can do to our forests and natural areas. When teaching Landscape for Life, I like to make a distinction between weeds like dandelions, which might (depending upon your outlook) be an inconvenience to you and your neighbors, and invasives, which take over large natural areas. Weediness is an evolutionary strategy, and pioneer species are weeds. So I am just choosing some weedy species over others! 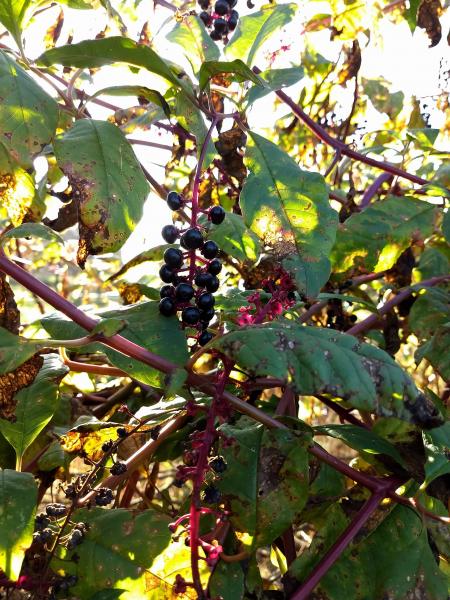 Fig  11: Pokeweed, Phytolacca americana. A beautiful native weed, but it sure does take over. Every year I cut down huge swaths of it so that I can see the young trees, while leaving small patches because it’s pretty and good for the birds. 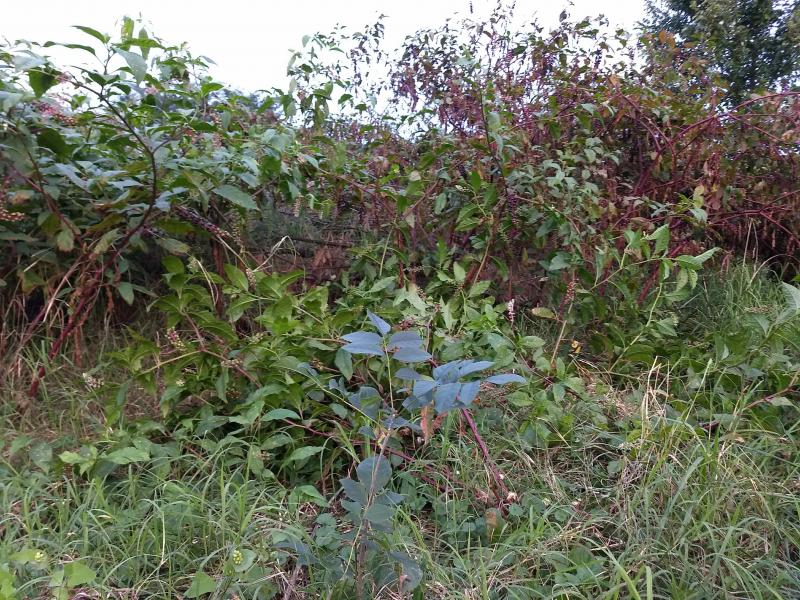 Fig 12: And when you cut back weeds like pokeweed you can free things growing underneath. This seems to be a young ash tree, one of several I’ve discovered. I’ll let it grow and see if it survives.

The final photo shows the hayfield next door being developed, and the run-off and erosion the project caused. There we go again, disturbing the landscape and creating open habitat for pioneer species. My son said, “There’s your new mission—get the people in those new houses planting meadows and forests!” Of course, at one point our house was new development as well. We humans are always at some stage of succession in our long history of disturbing landscapes, and I suppose the best we can do is make the effort to tend our garden well. 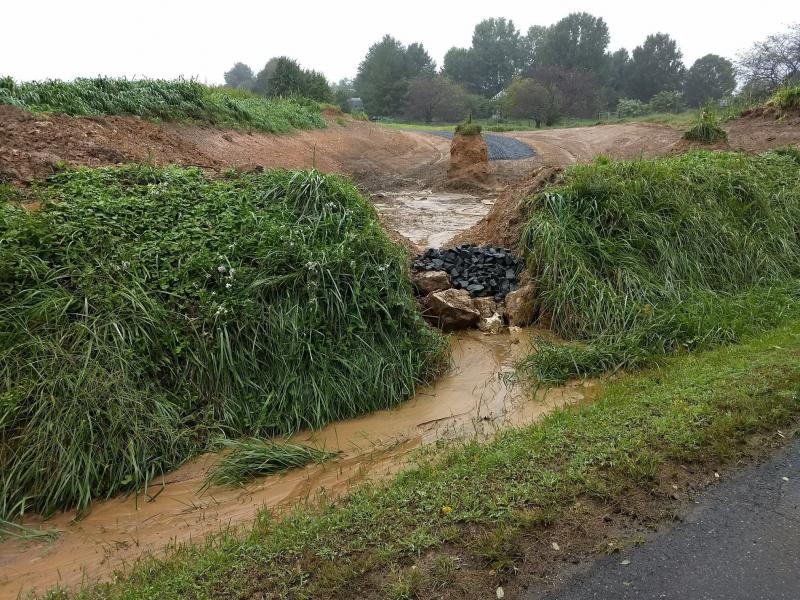 I'm also volunteering at NatureServe on a project on crop wild relatives and giving talks to the public on Landscape for Life topics. 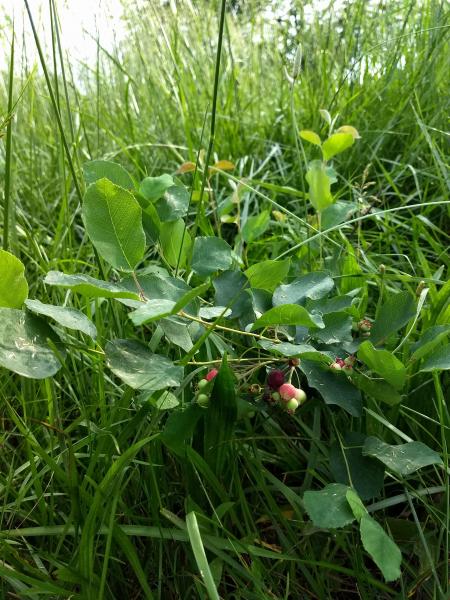 Fig  14: Serviceberry, swamped by the fescue 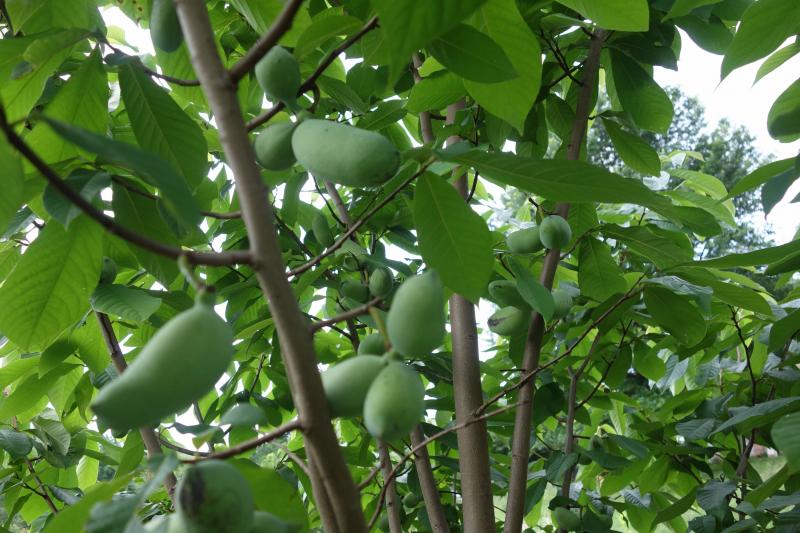