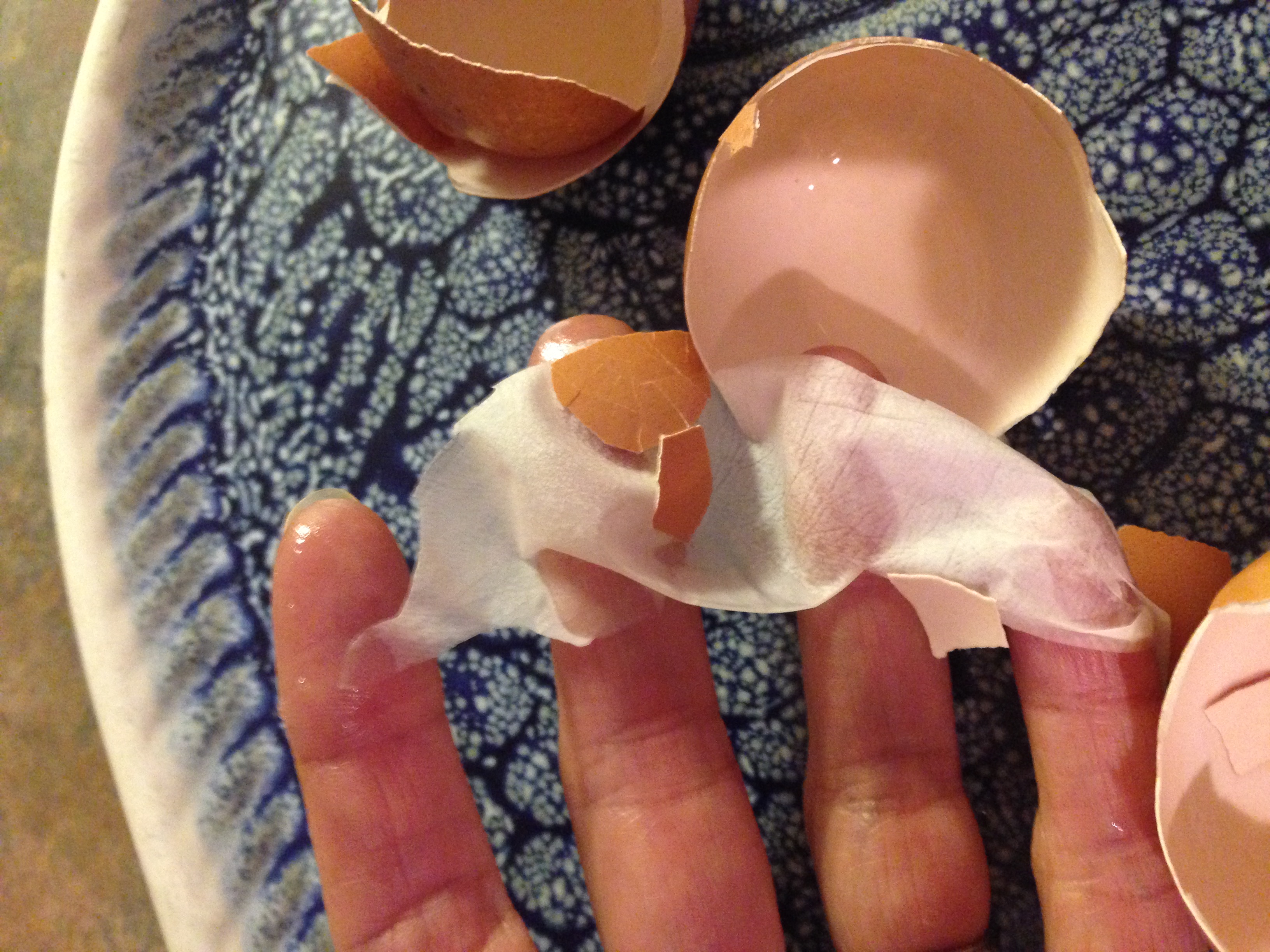 It’s a tale of an avocado pitting gone wrong. One minute, Kathy was stabbing avocado pits[i], the next, the knife had slipped and cut deeply into the ring finger of her left hand. She was doing fieldwork in Quito, Ecuador, and she was too far away from a doctor or hospital to get stitches.

After applying a tourniquet and pressure to slow the bleeding and then cleaning out the wound, Kathy’s friend washed her hands, cracked a raw egg, peeled the membrane from inside the shell, and applied the membrane—with the inside toward the wound—to the cut[ii]. Kathy said that it felt cool and soothing. Within 15 minutes the eggshell membrane, or telas del huevo (“egg fabric”), hardened like a small cast, eventually squeezing her finger so tightly the tip of her finger turned purple and she had to cut the tela off with scissors. She peeled off most of the tela, poured more alcohol on the wound, and rewrapped it with bandaids and a cut-up sanitary pad.

The next evening Kathy was able to see a doctor for the wound; the doctor declared the wound free of infection. He said that telas work to heal and to stop bleeding. After her first experience with a tela, Kathy talked to teachers in Quito who said that the egg tela was a common remedy when kids “busted their heads open” and similar injuries.

When Kathy returned to the United States and had a nurse look at the wound, the nurse had never heard of using eggshell membranes to knit wounds, but said that the finger was healing well despite the very deep cut.

I’ve always been interested in folk remedies, though as a paleoethnobotanist my interest is admittedly more in plants than other ethnobiological sources. When Kathy told this story, I wanted to know more about telas del huevo in Ecuador and elsewhere. I have had difficulty finding resources on the topic online[iii], and would like to learn more from this blog’s readers about their experiences using eggshell membrane to treat wounds[iv]. I have found several kinds of dietary supplements made from eggshell membranes, and some studies of the efficacy of the supplements, but very little scholarly work about the application of the membranes directly to a wound. In the meantime, I conducted experiments of my own to see what I could learn about telas del huevos, and their application as a folk remedy. 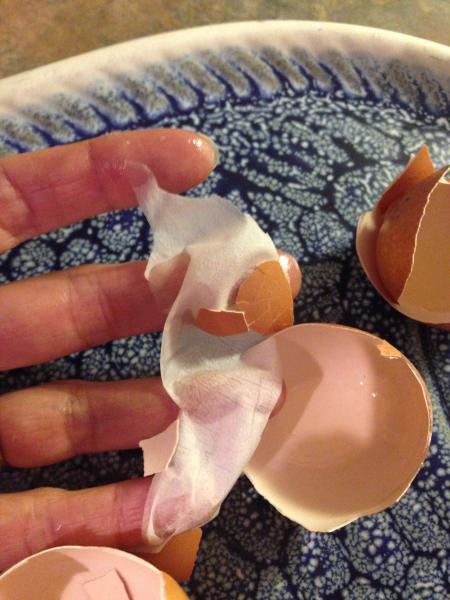 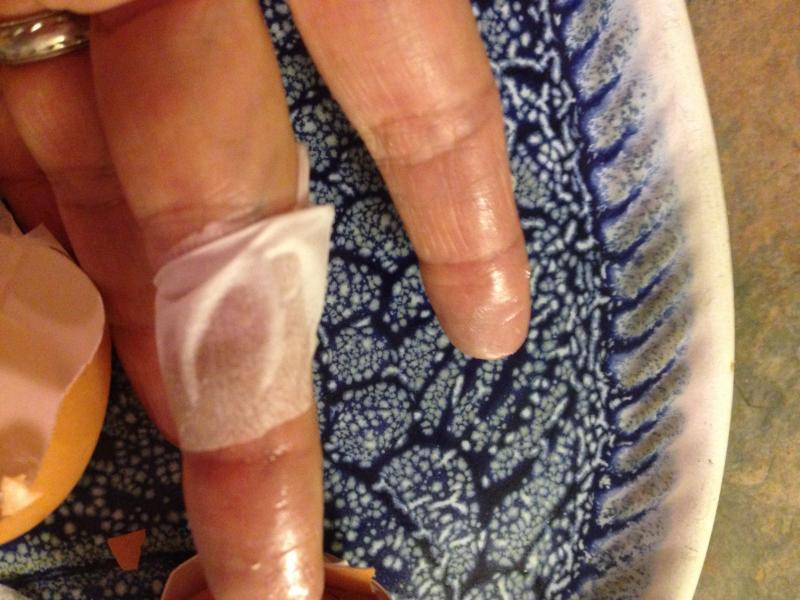 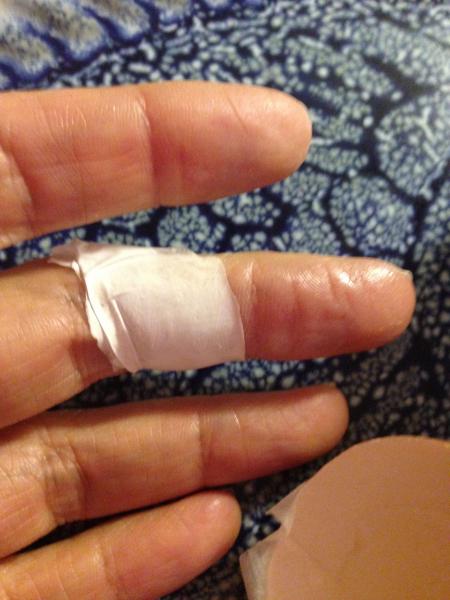 I was initially interested in seeing the membrane act on a wound like a cut, but my husband declined to let me stab or cut him in the interest of science[v], so I applied the membrane to my own unwounded skin (see Figures 1-3). It was interesting to feel the membrane tighten and dry, and I can see that it could become an effective way to pull a wound together. I had seen a recommendation in Jocelyn’s Tips[vi] for using the membrane to draw out pimples, and when I applied this to myself, found that the membrane worked much like Biore Pore Strips. I also used the membrane on my thumbpad overnight to help draw out a splinter, but I suspect that I needed more consistent application to confirm that the membrane sped up this process.

So although I feel fairly comfortable identifying best practices for removing avocado pits for making guacamole, I would like to know more from my fellow ethnobiologists about eggshell membranes in folk remedies and other applications.[vii]You can leave comments with your experiences for me below on this blog.

[i]No doubt Ethnobiologists have many ways of pitting avocados without risk of injury, but that’s a discussion for another time.

[ii]This article does not advocate for the use of eggshell membranes for medical treatments.

[iii]As an “independent scholar”, I have had challenges accessing resources for researching topics like this.

[v]He asked why I didn’t volunteer my own body for the experiment, but I pointed out that obviously that would introduce an unacceptable level of subjectivity to the study.

[vii]My gratitude goes to Kathleen S. Fine-Dare for allowing me to use her story and experience, with some light teasing. I am almost certain that she won’t pit avocados like that again. Any errors in the research and representation of the use of eggshell membranes is my own.