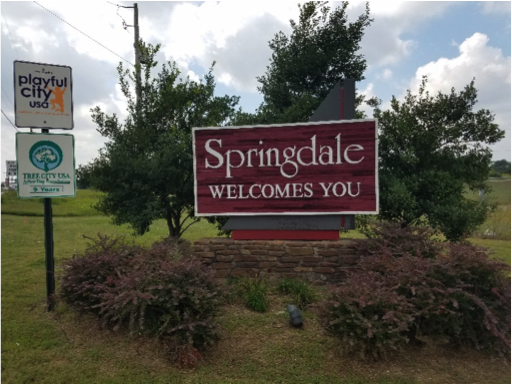 Thousands of people from the Republic of the Marshall Islands (RMI) have, like T., moved almost 10,000 km across the globe to settle in Springdale, forming the largest community of Marshallese people outside of the Islands.  The community continues to grow as more migrants, under the terms of the Compact of Free Association (COFA), arrive to pursue education, healthcare, employment, and other opportunities, and to strengthen family ties.  The COFA is an agreement between the US and the RMI that was signed when the Islands went from a US trust territory to an independent country in 1986.  One of the main provisions of the COFA is that it allows Marshallese people to enter, work, and live in the US without needing a visa.

The Marshallese community in Springdale is very insular and understandably wary of researchers.  The recently declassified Project 4.1 shows that Marshallese people were used as guinea pigs in nuclear tests back in the Islands.  However, appreciation of good food is something that people of all cultures have in common and generally enjoy sharing.  Many previous studies have shown that ethnic food is symbolic of culture.  Therefore, to study the relatively recent, close-knit, exponentially growing, laid-back, colorful community of Marshallese people in Springdale, I chose to use their foodways as a lens.  I am especially interested in the continuities and changes in traditional Marshallese foodways, how traditional food knowledge is distributed throughout the community, and how foodways are used to reinforce Marshallese group identity on a “New Island” (ie, Springdale). With a lot of help from friends, colleagues, and community leaders, I conducted 31 semi-structured interviews with Marshallese adults in Springdale.  Then, I collected 116 surveys, also from adult members of the community and also with the help of several folks who have my eternal gratitude.  Finally, and with additional assistance, I had 21 Marshallese adults complete a pile-sorting task.

My preliminary analyses depended on the verbal set and the written set of free-lists that I collected during the interviews and the surveys respectively.  I calculated the salience of each listed item for each set of free-lists using a novel measurement, B’, developed by Dr. Michael Robbins at the University of Missouri and Dr. Justin Nolan (my advisor) at the University of Arkansas.  The advantage of B’ over say, S calculated by Anthropac, is that B’ ranges from 0 to 1 and it can be used to compare lists of different lengths (see the upcoming paper in Field Methods, which uses sample data from this project).  For both sets of free-lists breadfruit (mā), was the most salient item by far. Breadfruit is a large tropical fruit with starchy flesh that tastes similar to a potato.  Breadfruit can’t be grown in Springdale because of the climate, nor would the large trees fit inside a standard greenhouse.  The breadfruit that is sold at the Asian groceries in Springdale is imported from the Caribbean, so it does not have the same fresh flavor that most Marshallese people remember. 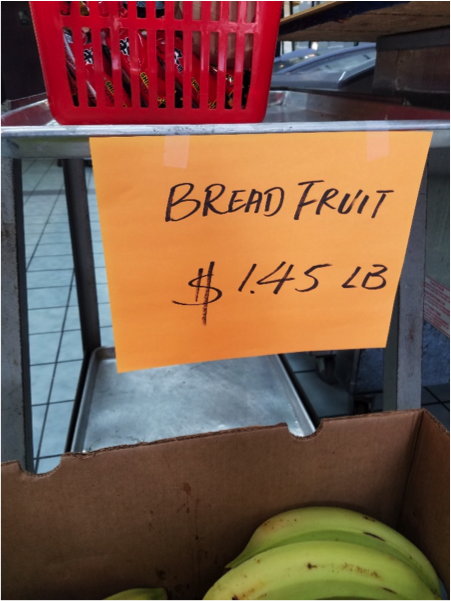 While we in the West consider animal protein the basis of a meal, Pacific Islanders are more fond of staple starches.  For the Marshallese, breadfruit is their traditional staple starch.  In the Islands it grows fresh from about April through September, but it can also be dried and fermented for year-round consumption.  A single breadfruit could be a meal in itself, and it would be a healthy meal.  Breadfruit is high in fiber, with a moderate glycemic index, and small amounts of calcium, iron, vitamin C, riboflavin, and niacin.  Since breadfruit in Springdale isn’t always available or of good quality, other starches often take its place in the Marshallese diet.  Chief among these pretenders is rice.  Marshallese people were introduced to rice back in early 1900s when their country was a Japanese mandate.  It is still a popular import there.  Rice is ubiquitous in contemporary Marshallese cuisine.  It even made it to the top of the lists of traditional foods that I collected, coming in as the 15th most salient item (out of over 100 items) for both sets.  The results of the pile sorts confirm that rice clusters with more traditional starchy foods.  The problem with chowing down on white rice is that unlike breadfruit, it has a very low nutritional value.  Pacific Islanders have a type II diabetes prevalence that is about eight times that of the average Caucasian American.  Furthermore, COFA migrants are ineligible for many federal healthcare programs. 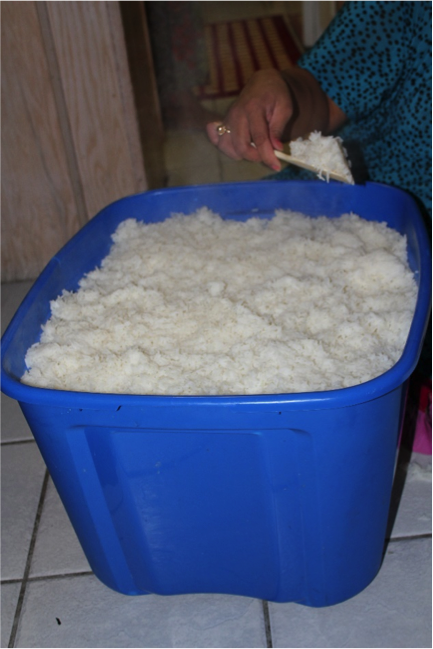 Arkansas happens to be the number one rice-producing state in the country.  In addition, Springdale, AR in particular is home to several significant poultry companies.  Therefore, it is not surprising that chicken also showed up at the top of my lists of traditional Marshallese foods.  The Marshallese way of preparing chicken is to soak it in a soy-based marinade and then barbeque it (and then serve it over a heap of rice).  Chicken and pork, another American addition to the Marshallese foodscape, cluster with more traditional seafood in the pile sort results.

Traditional Marshallese foodways have certainly been adapted to life on the New Island (dubbed “Chickendale” by the locals), yet Pacific scholars have cautioned against focusing too much on changes and not enough on historical continuities.  Island traditions remain strong in Springdale, not just the language and the mumus, but the food as well.  The key to continuity is the constant influx of visitors from the Islands who arrive for family celebrations or other reasons.  Instead of packing suitcases, the travelers bring coolers full of reef fish and other traditional Marshallese foods.

I would like to thank the Society of Ethnobiology for their support of my research.  Hopefully this short report has whet some appetites.  When I have completed my analyses I plan to submit a comprehensive paper for publication in the Journal of Ethnobiology.   Kommol tata!