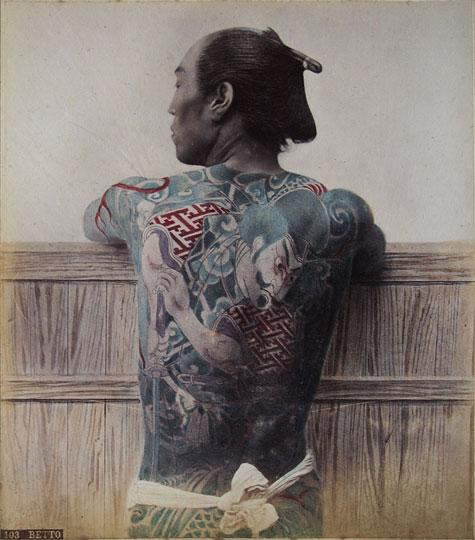 Tattoos are everywhere. As the tattoo taboo fades into sailor Jerry’s relict bottles of booze, swallows and pin-up girls, populist culture is embracing a new age of socially accepted body art. Tattoos are donned by old and young a like, cross cutting cultures, genders, and even stereotypes.  But the surge in inked epidermis is not an entirely new fad. Archaeologists have recovered mummies and burials of tattooed humans from around the world; a 5000-year-old Scythian mummy from the Altai Mountains had ornamental animals on their arms and upper back, a 1000 year-old-mummy from Chiribaya Atla was found with birds, reptiles and symbolic ciphers on their hands, arms and legs. The Tyolean Iceman, a 5300 year-old-mummy from the Ötztal Alps near Austria wins the world’s oldest tattoo; archaeologists used optical microscopic methods like energy dispersive X-ray spectroscopy to show that Tyolean’s skin was tattooed with the original ink: ash. No doubt, these tattoos had spiritual and cosmetic appeal, but research has shown that tattooing in some parts of the world co-evolved with other therapeutic practices like acupuncture to treat arthritis and abdominal problems. Traditional tattooing is alive and well in some parts of the world, some still use bamboo thorns as needles or bamboo sticks, Thai monks donned tattoos for protection, Kalinga tattooing in the Pilippinnes was used for the success of headhunting and is a mark of beauty for young women, and Karo people in Ethiopia proudly display body scarifications as rights of passage associated with personal development.

Tattoos are as diverse as the cultures that wear them; their elegant permanence connects us to ideas, stories, landscapes and personal history. In celebrating this diversity, we’ve selected the Top 10 Ethnobiology tattoos (in no particular order) from a stack of photos submitted my SOE members and friends. Enjoy!

1. Alisha Gauvreau is a Hakai Scholar and Phd student from the University of Victoria studying zooarchaeology and paleoclimatology. Hey beautiful chest piece is a stylized hybridization of a Lotus flower (Nelumbo nucifera) and a passion flower (Passiflora sp.), "In 2005 I participated in my first archaeology field school in Belize. We were working at a Pre Classic Mayan site located deep in the jungle. I found a passion flower growing along the trail on our first hike out to the site: a good omen". She combined the passionflower with a lotus because of the symbolism inherent in the ecology of the flower: beautiful lotus flowers emerge amid the muck and the mire. 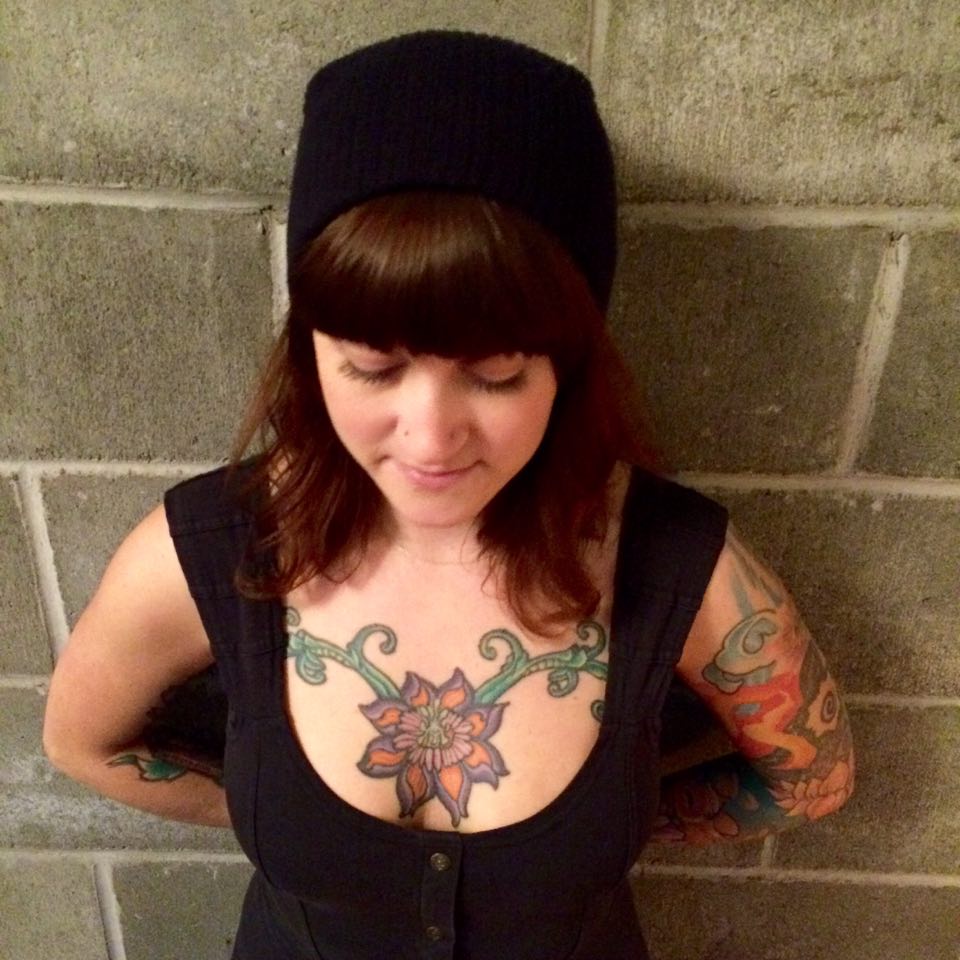 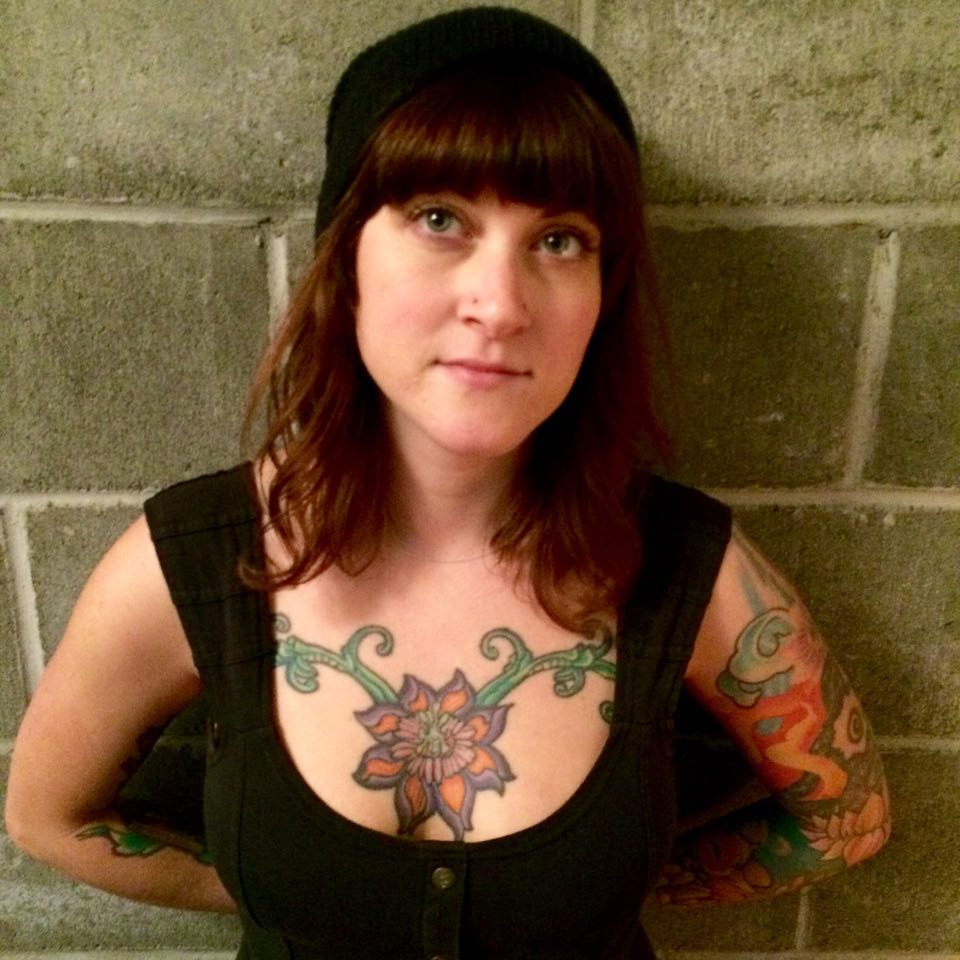 2. Gemma Calgie is an Irish archaeologist and got this beautiful Lascaux horse tattoo when she was 21 in the final year of her undergraduate degree. “For me it represents the perfect combination of my love for horses, art, and the past. I especially like the placement, as I can make him 'gallop' when I move my foot. The only downside is the inevitable conversation with uninformed strangers, who ask 'Why do you have a fat sheep tattooed on your foot?' Sigh.” (Nice ol'mil can Gemma!) 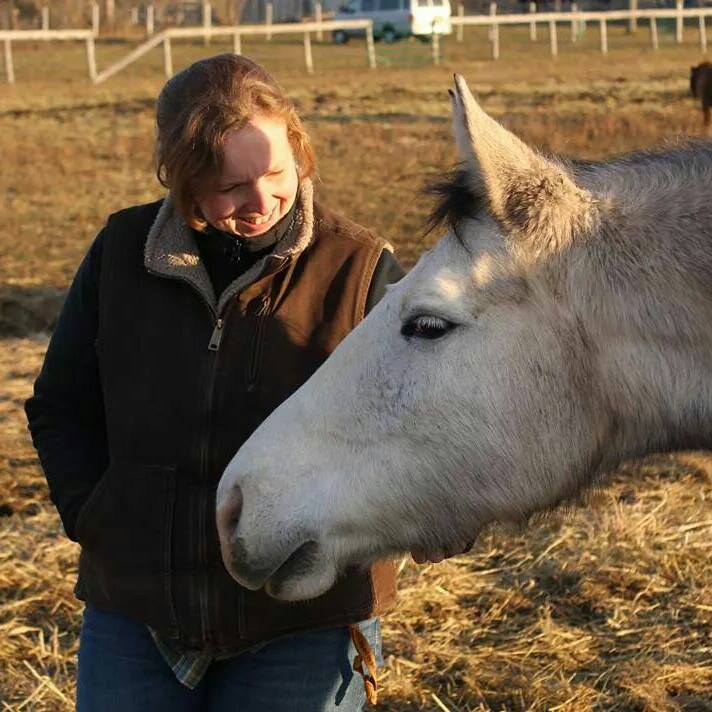 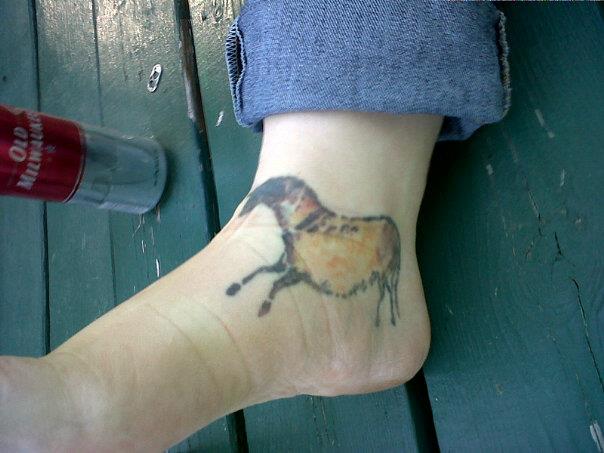 3. Sâkihitowin Awâsis (Cortney Dakin) is an Otipemisiw / Anishinaabe land defender and spoken word artist continually inspired by acts of decolonization, resurgence, and community healing. Sâkihitowin has a degree in environmental philosophy and was recently an invited speaker at the 2nd International Historical Ecology Meeting in British Columbia. Her tattoo was designed by Dion Logan, an Anishinaabe man from Chippewas of the Thames First Nation. The design was based on various pysanky (Ukrainian Easter eggs) created by her late Ukraninan great grandmother, Olga Hlywka. This was definitely one of our favourites! 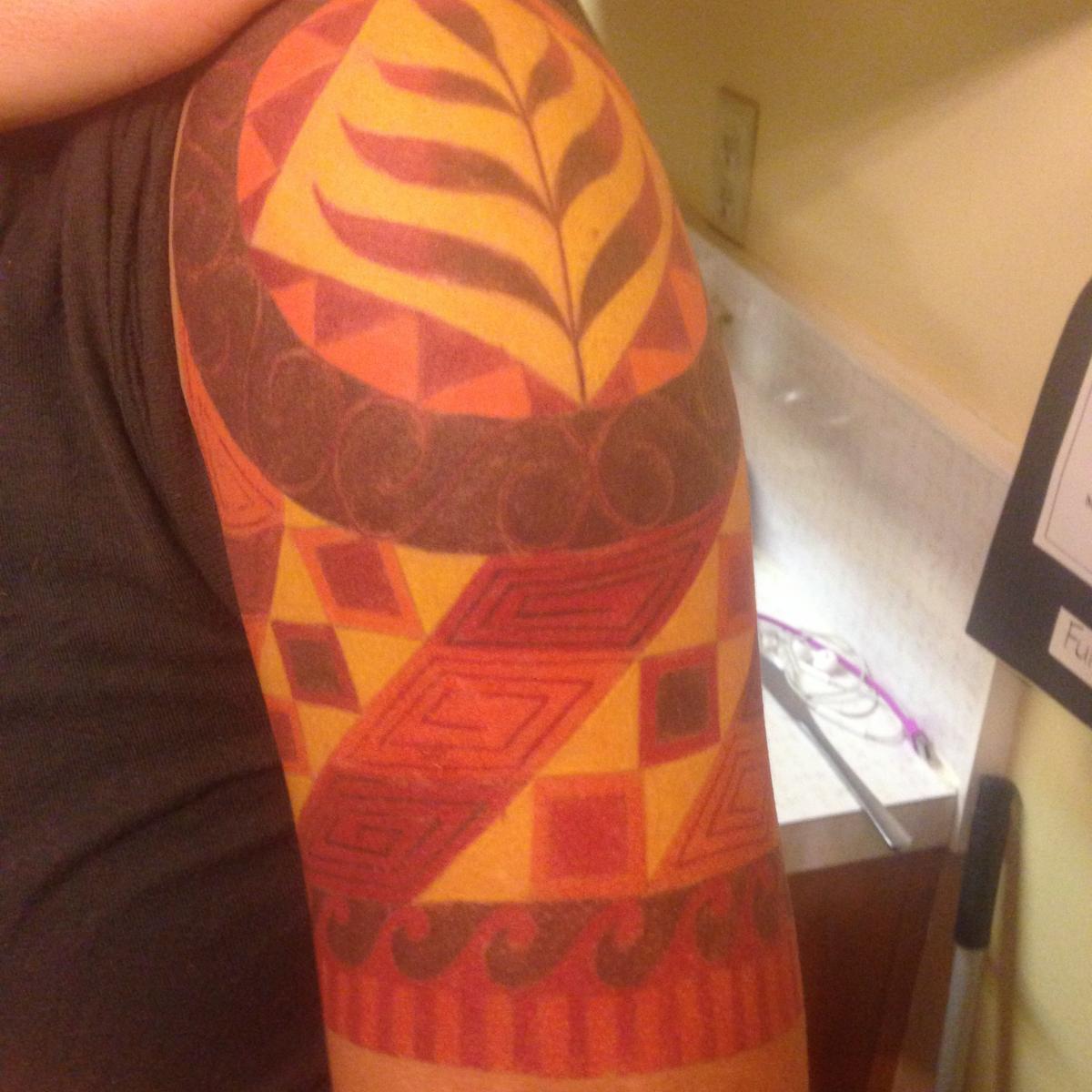 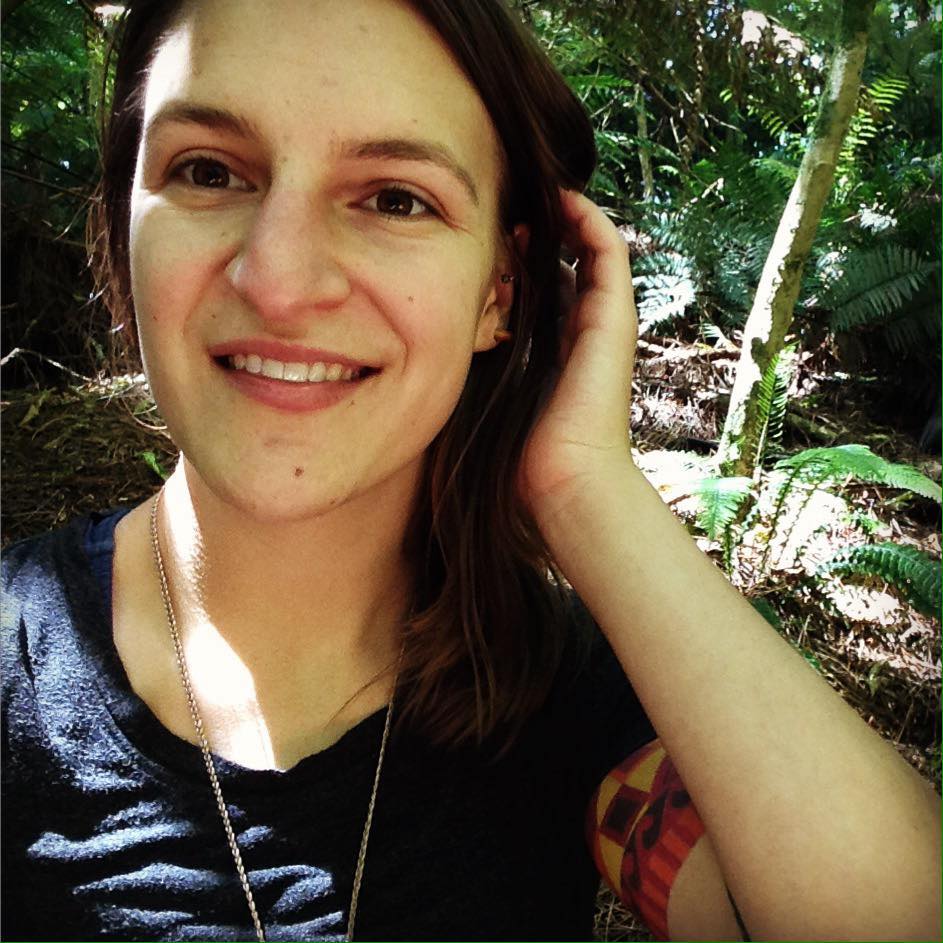 4. Spencer Hamilton is a professional skateboarder from Vancouver, BC. He is an avid supporter of the slow foods movement and food sovereignty and has encouraged alt-cultures like the skateboard and music scenes to be more engaged with the foods they consume and the companies they support. Spencer is an outspoken critic of Monsanto – he has over 42,000 followers on Instagram under the handle @monsantokills and has custom skateboards and t-shirts made by his sponsors that decry the violence and proprietary injustice that is the foundation of Monsanto and companies like them. His celebration of garden-grown foods and exquisite connection to plant life make him an honorary ethnobiologist and in our top ten series for best ethnobiology tattoos. Here is a sample of just a few of the tattoos Spencer has in celebration of healthy, happy veggies. 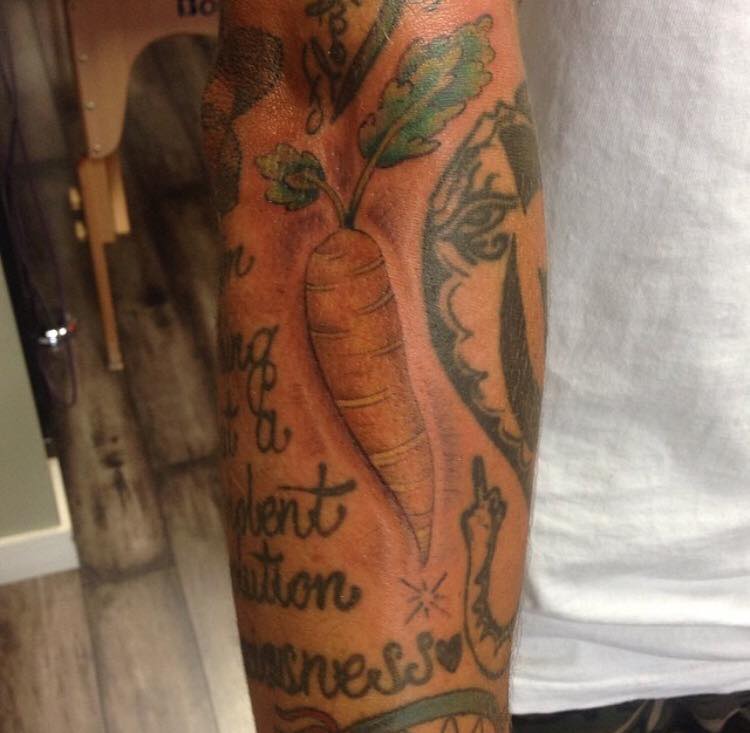 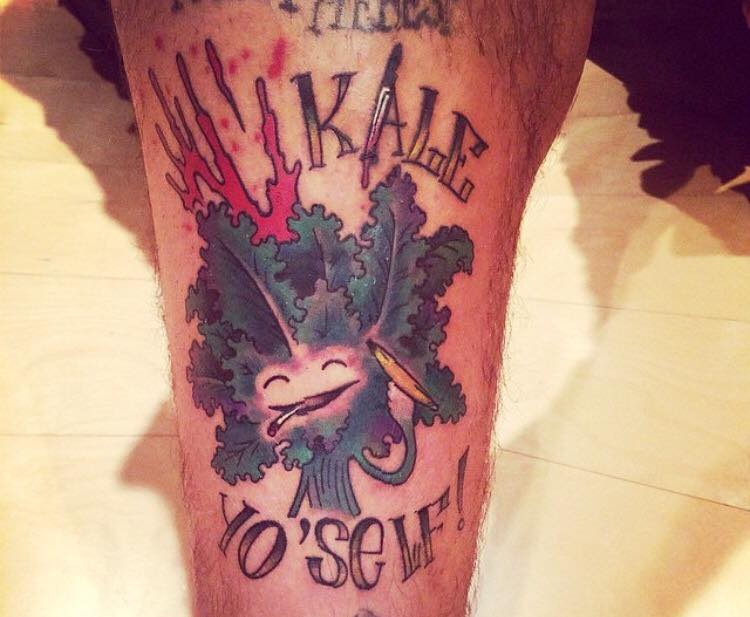 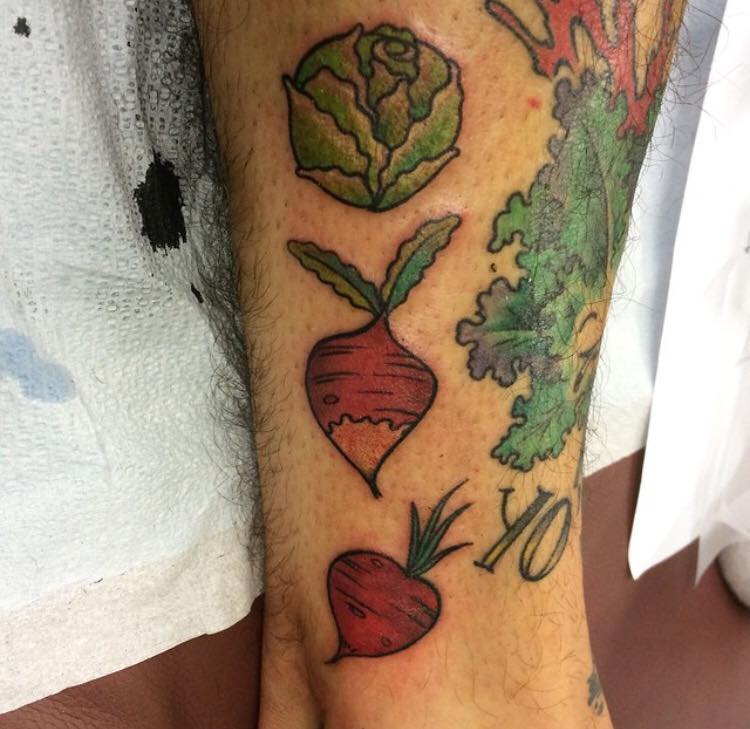 5. Ginevra Toniello comments on her striking back piece: “To me, crows serve as a symbol of the remarkable and ominous human condition”. Ginevra is a Masters student in archaeology researching the productivity of ancient clam gardens on Quadra Island in British Columbia. Her tattoo screams West Coast - she notes that crows are prevalent in her East Vancouver neighbourhood, “they’re intelligent, strong and pesky creatures”. (Tattoo by Kim Sirrs) 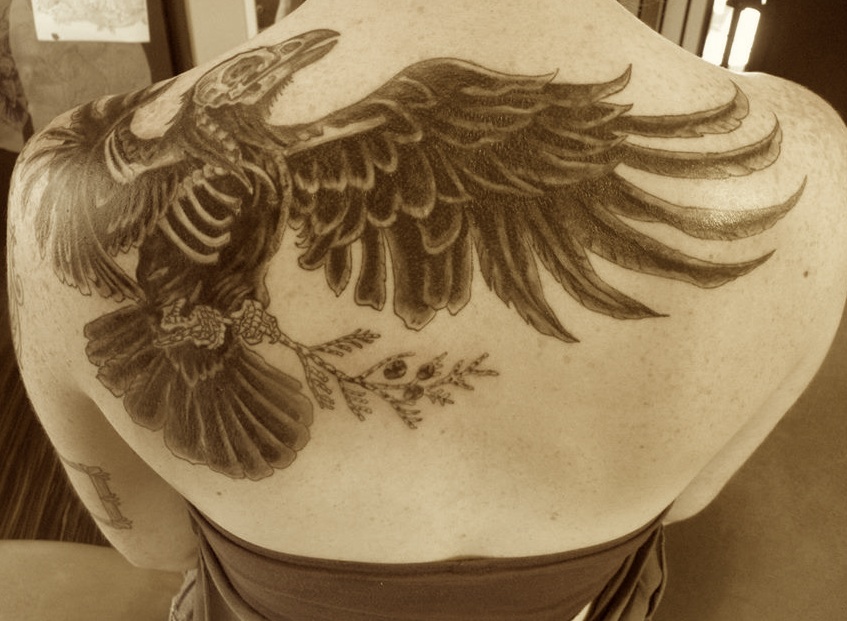 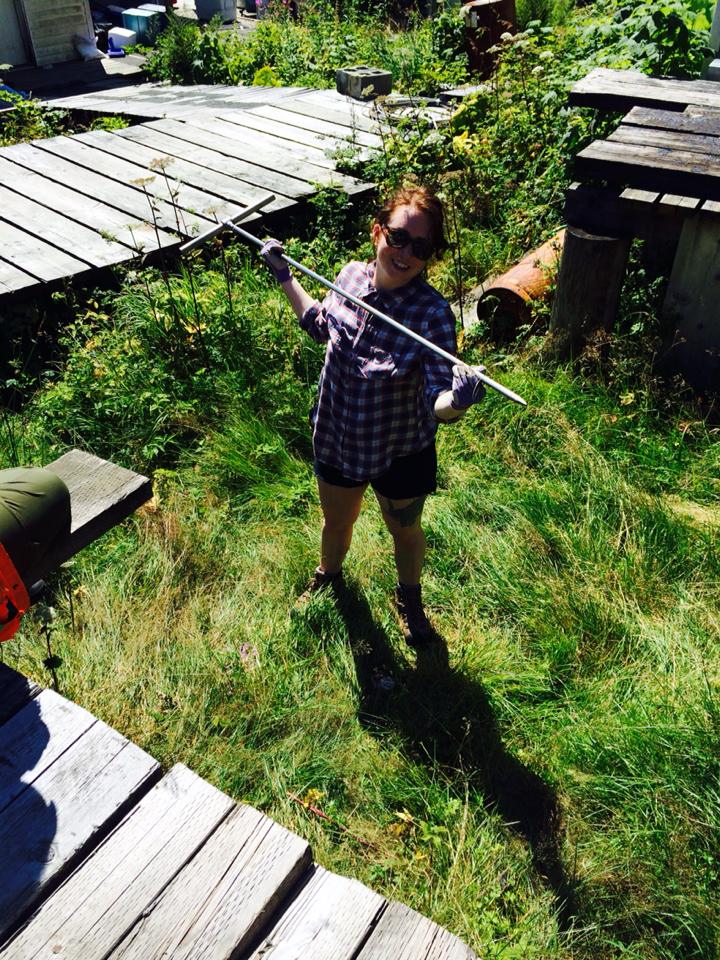 6. Shana Hirsch is a PhD student at University of Idaho, her research looks at how salmon habitat restorationists and scientists deal with climate change in their work in the Columbia River Basin. “I've been collecting tattoos for a while, and my friend Morag Sangster in Scotland is the artist. She did my first tattoo - the bass 20 years ago to commemorate some fishing I was doing at the time. She did the nautilus last year. I've always loved nautiluses, they are so impractical looking but they have survived for longer than most creatures. I love that they don't make sense." 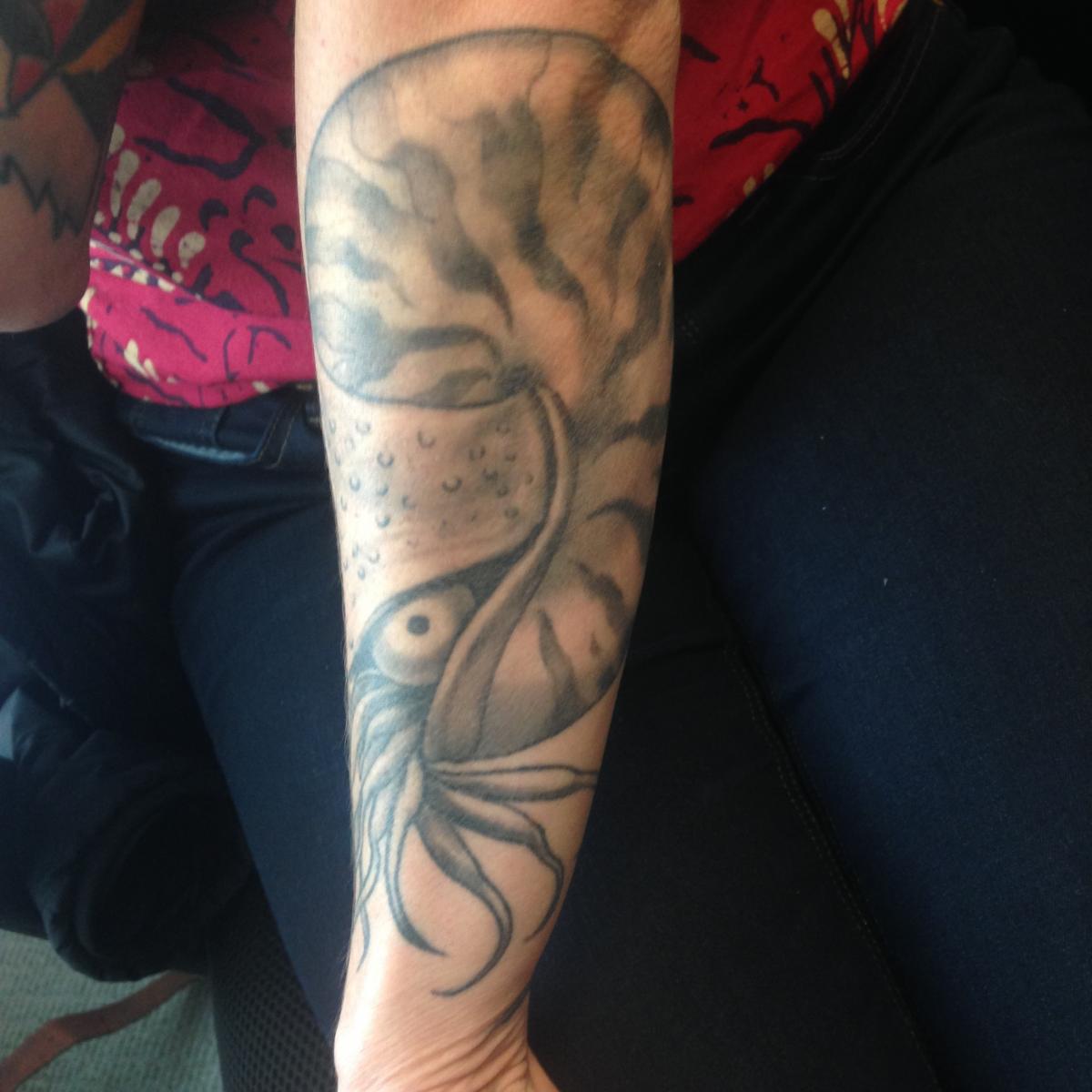 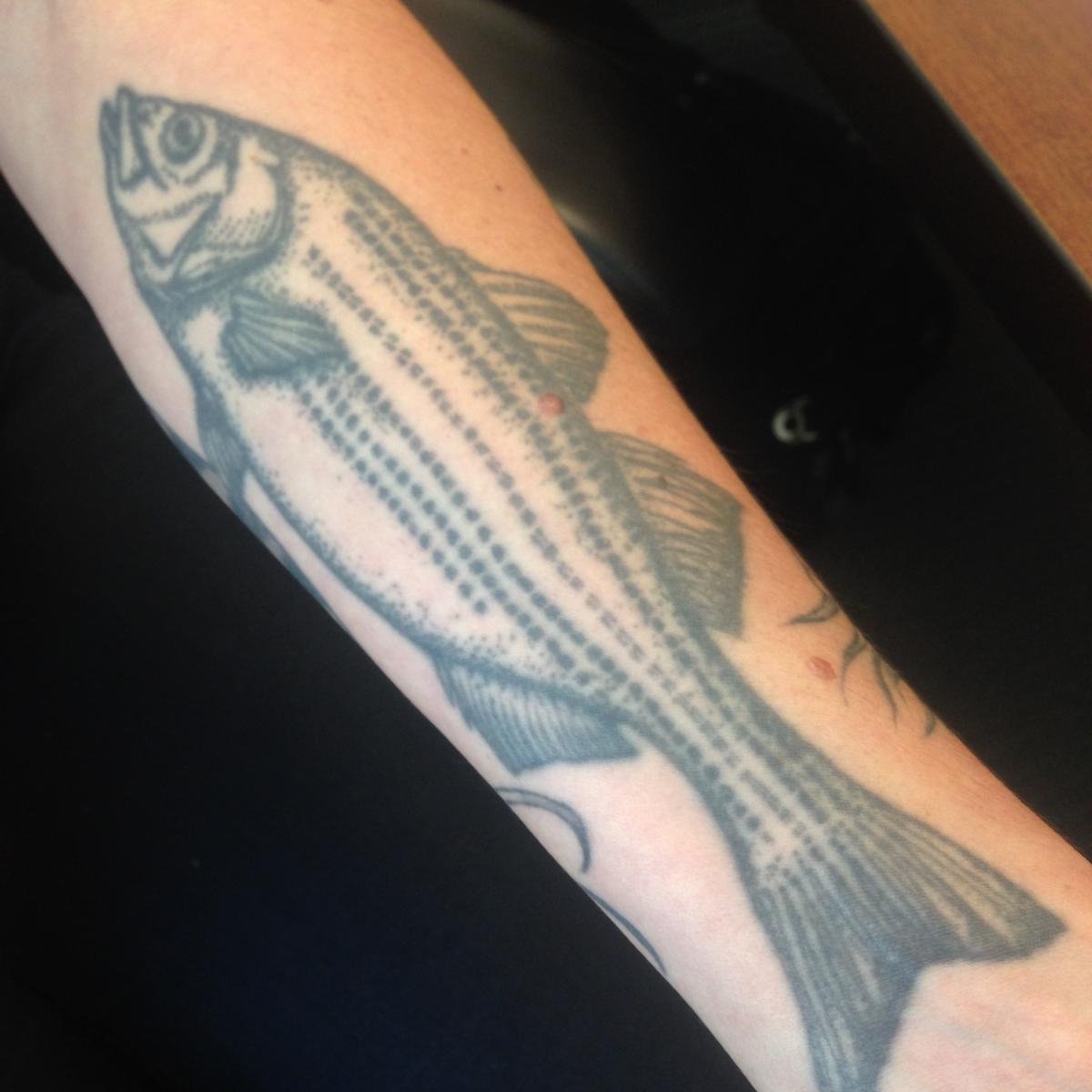 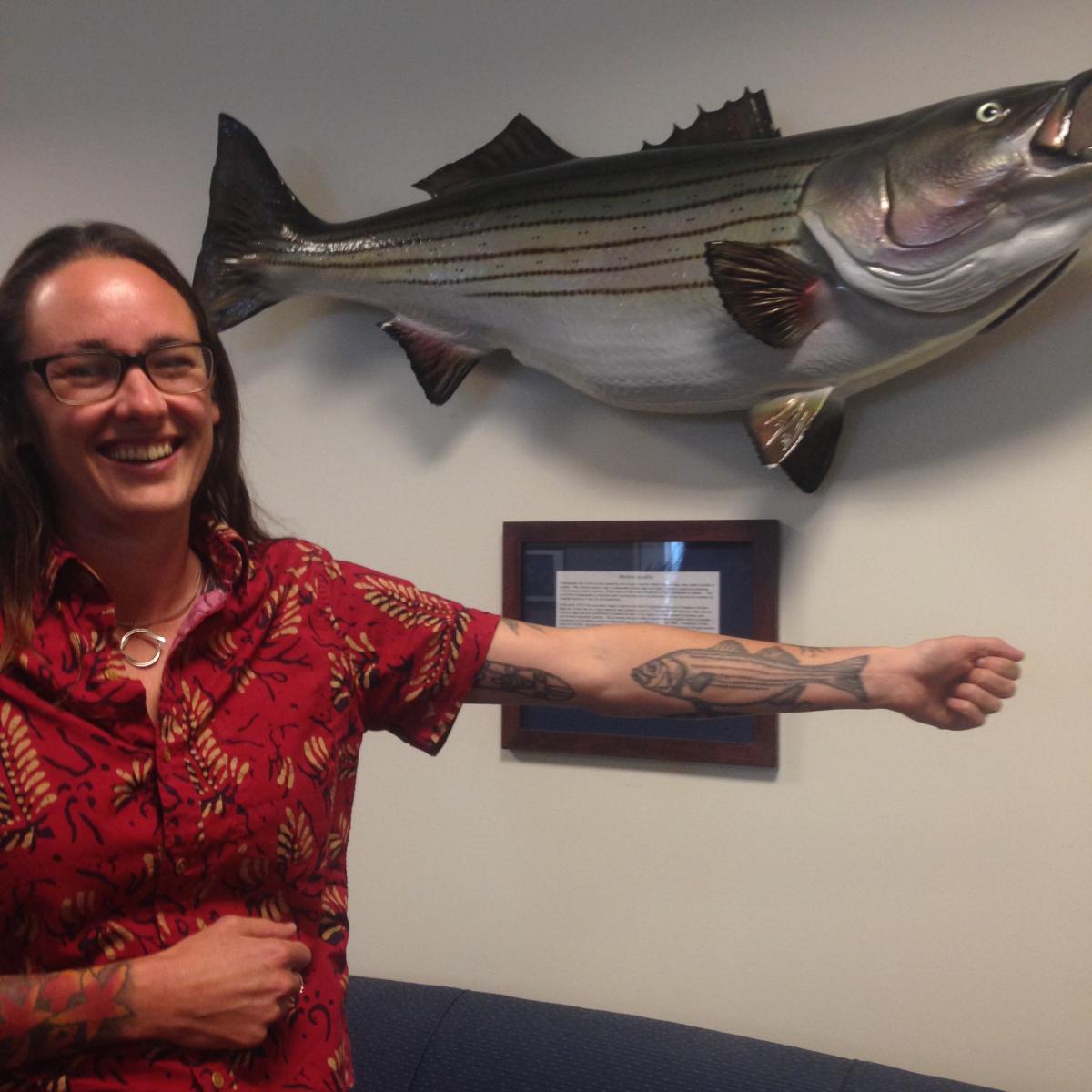 7. Chelsey Geralda Armstrong has long loved yarrow (Achillea millefolium) for it’s chamomile-mint like taste and that it grows in all her favourite places (along Lake Nipissing and the Skeena River). As a kid, a Dokis First Nations Elder taught her yarrow was a women’s plant with “it’s own blood”. One of the first plants she fell in love with, yarrow paved her way into the world of archaeology and ethnobiology. Chelsey has been serving on the SOE board of directors for three years and loves any excuse to talk about yarrow during the yearly conference! 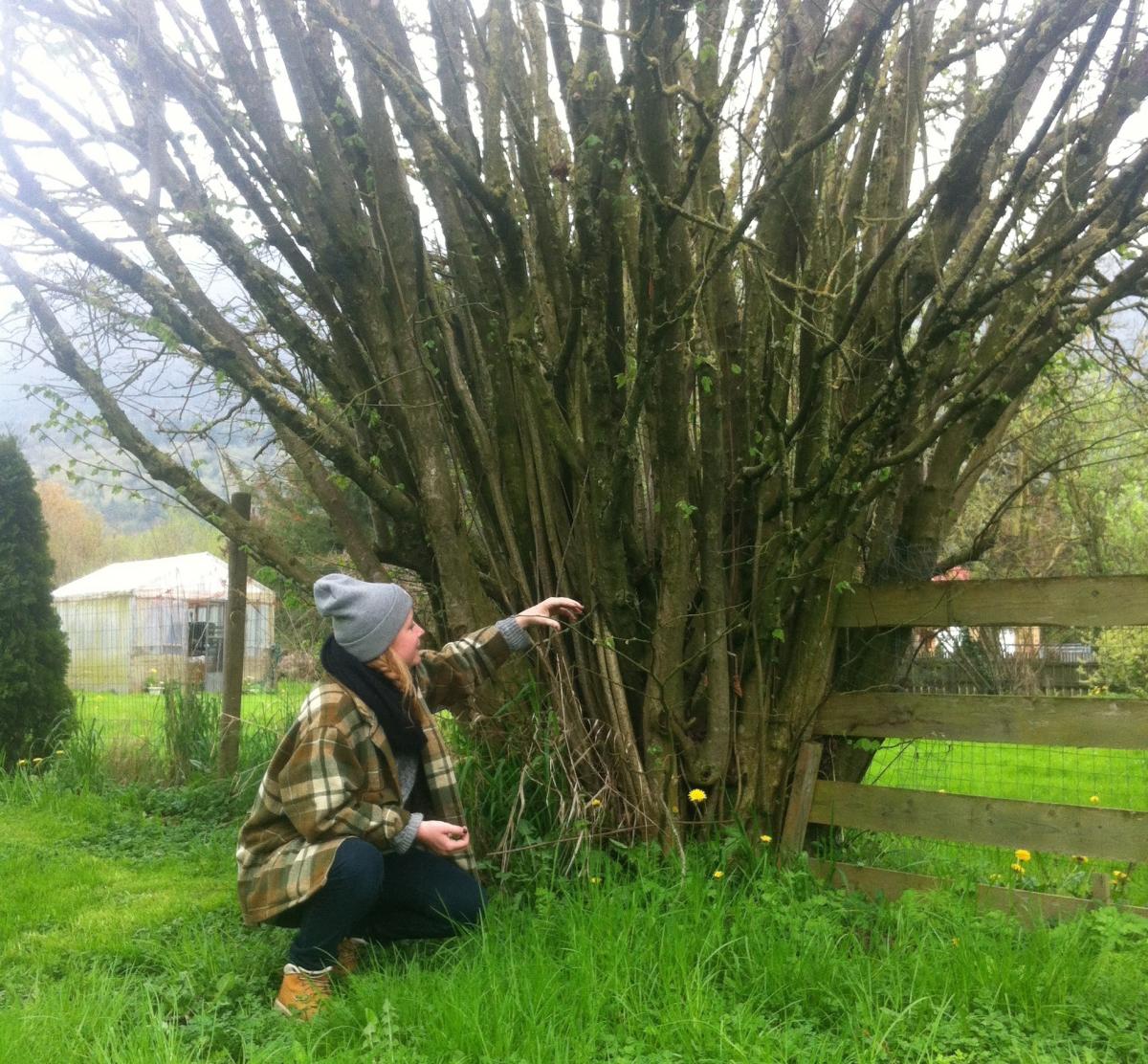 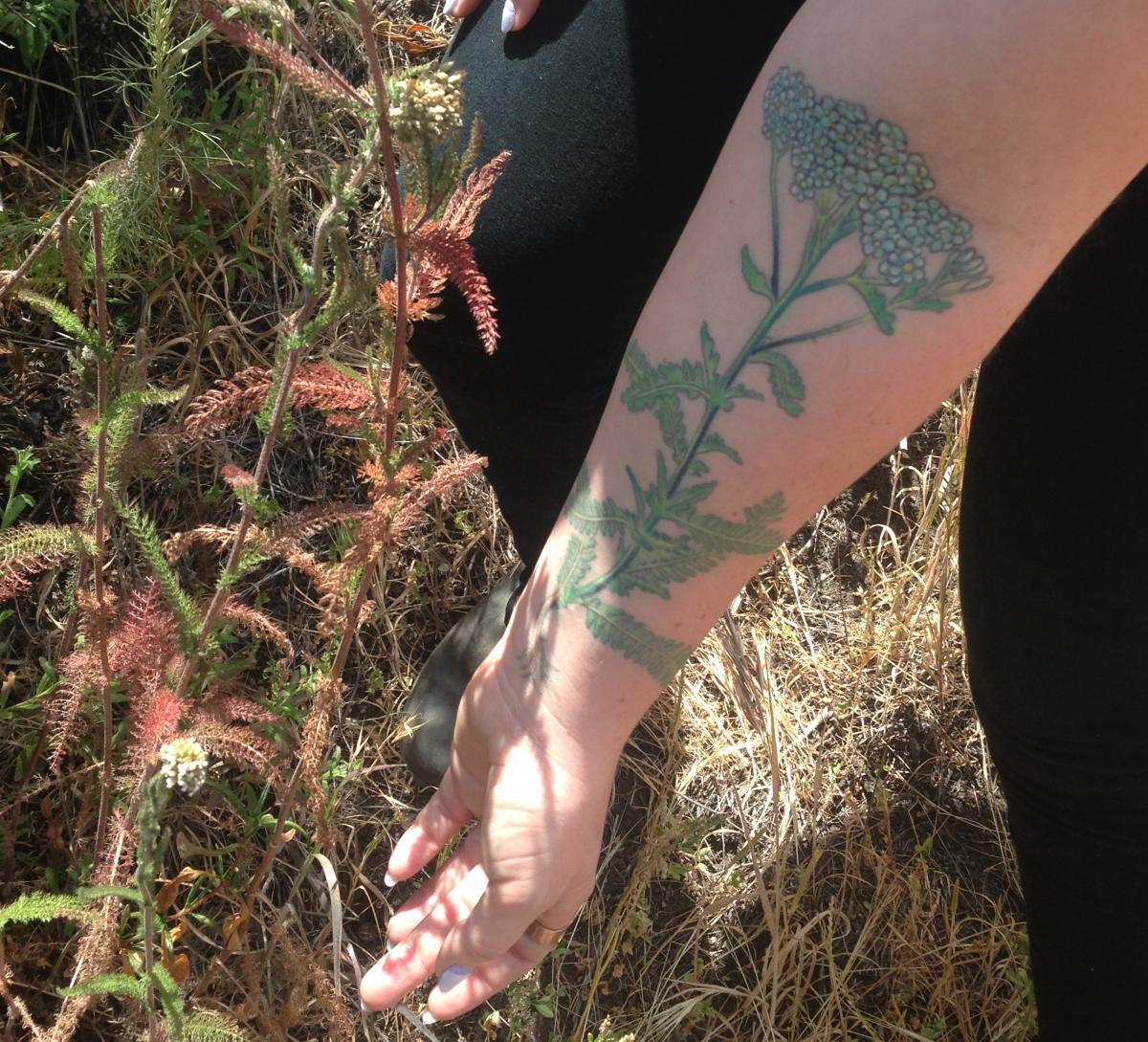 8. Dr. Andrew Gosler is an ornithologist and professor at Oxford University. Andy’s tattoo was designed by Colin Wilkinson, it depicts an ‘ewa ‘ewa (Haiwaï, sooty tern) for the Ethno-ornithology World Archive logo, of which Andy is director. The logo entails something he wanted to capture for his sense of self; a passion for birds and conservation. The tattoo is, for him, a deeply personal expression (after all, it’s permanent!) – we thank Andy for this beautiful submission! 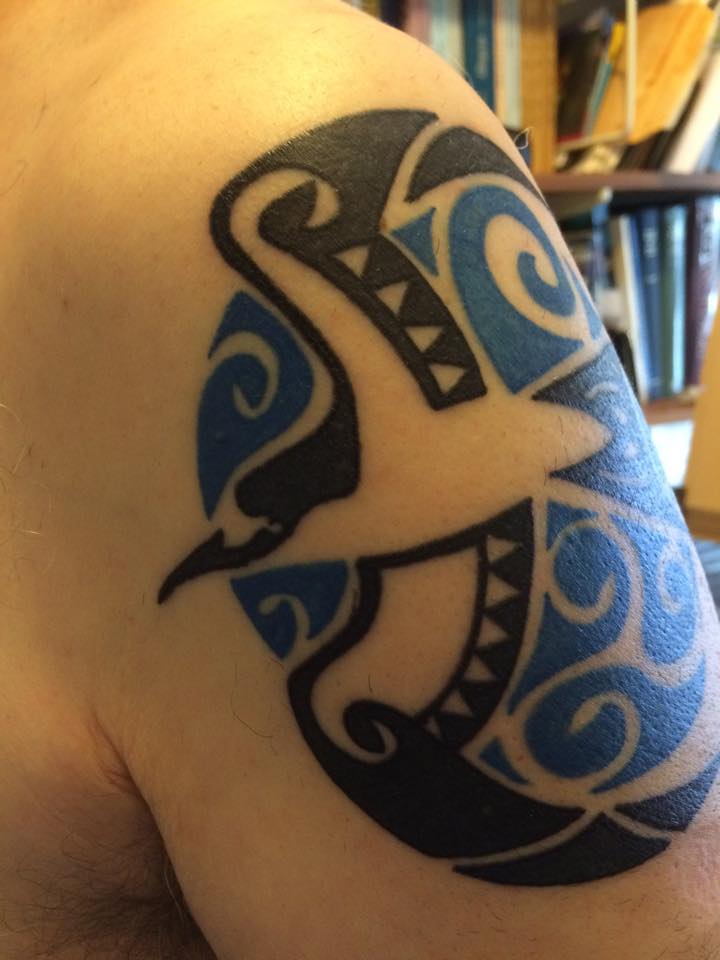 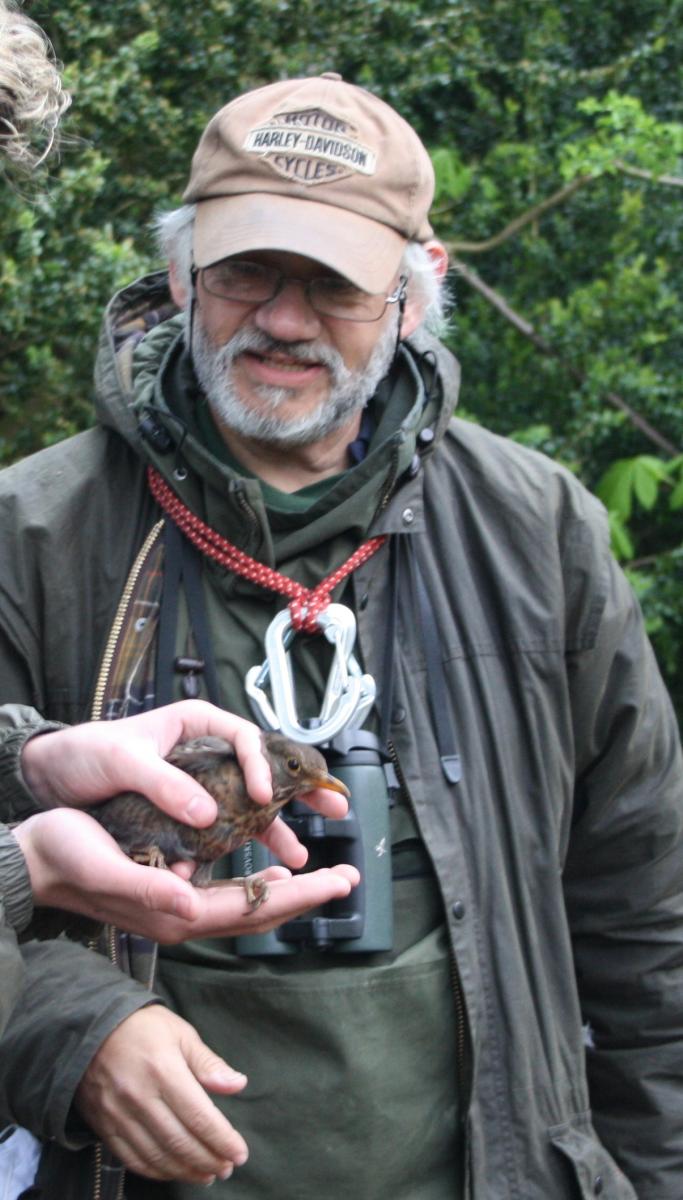 9. Char George is Tsleil-Waututh and Skwxwú7mesh First Nations woman from British Columbia. She is a tradtional paddler and archaeologist and shared one of her first tattoos with us - an ode to wolves and her ancestry. She wanted to make sure it was something that represented who she is and where she is from. The feathers represent her Squamish side and the wolf represents her Tsleil-Waututh side. 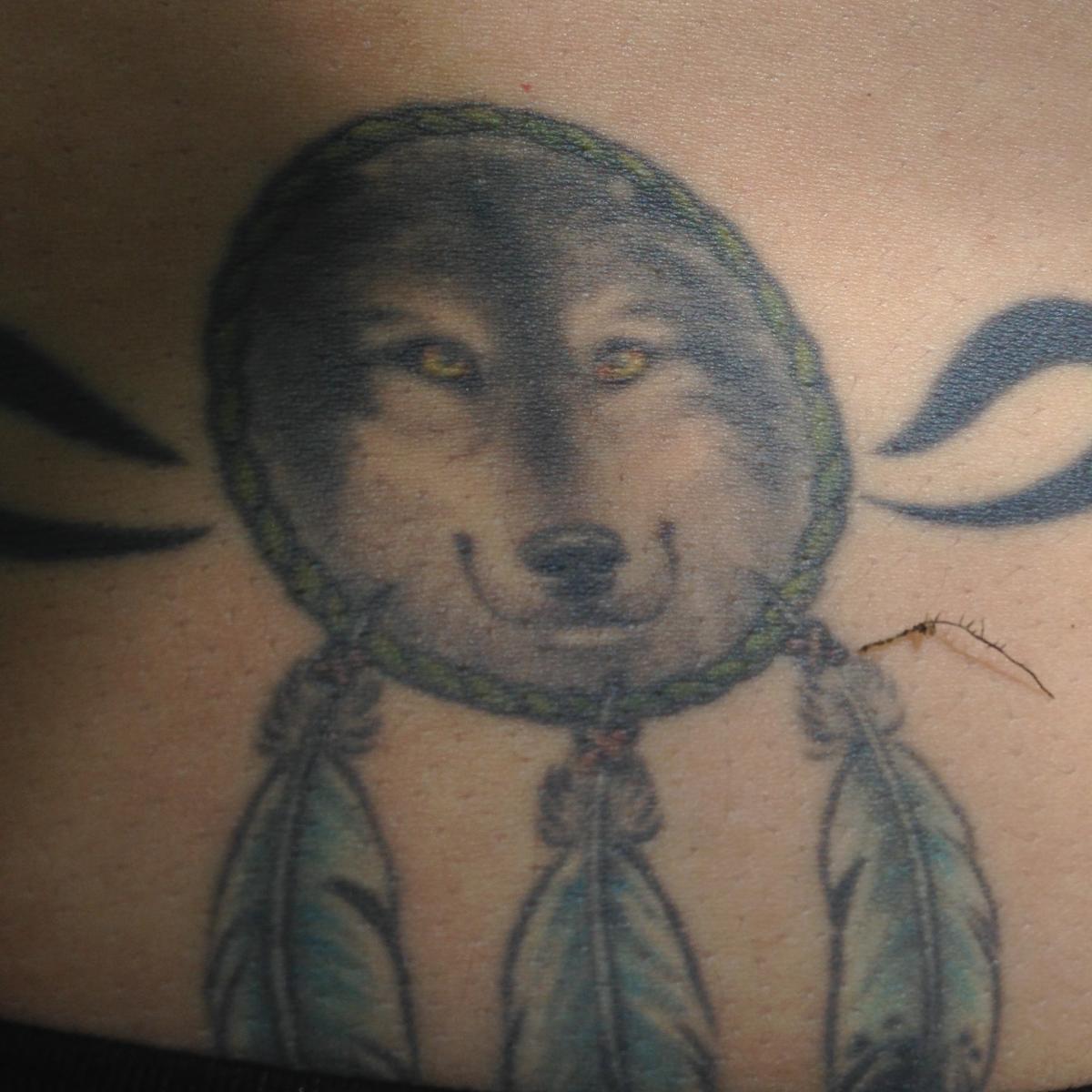 10. Laura Ash is a Clinical Herbalist and Founder of Herbal Anthropology Project, which helps protect the Intellectual Property Rights of Indigenous People and their traditional knowledge. She is inspired by the healing and sacred power of plants, which will continue to grow on her body until she's well into her 90's. Her tattoos consist of Oriental poppy (Papaver somnifera), Rose (Rosa spp.), Elderflower (Sambucus nigra), Violet (Viola odorata), Calendula (Calendula officinalis), Dandelion (Taraxacum officinalis), Lavender (Lavendula officinalis), California poppy (Eschscholzia californica). The next two flowers she will be adding to her growing collection are Folxglove (Digitalis purpurea), and Passionflower (Passiflora incarnata). 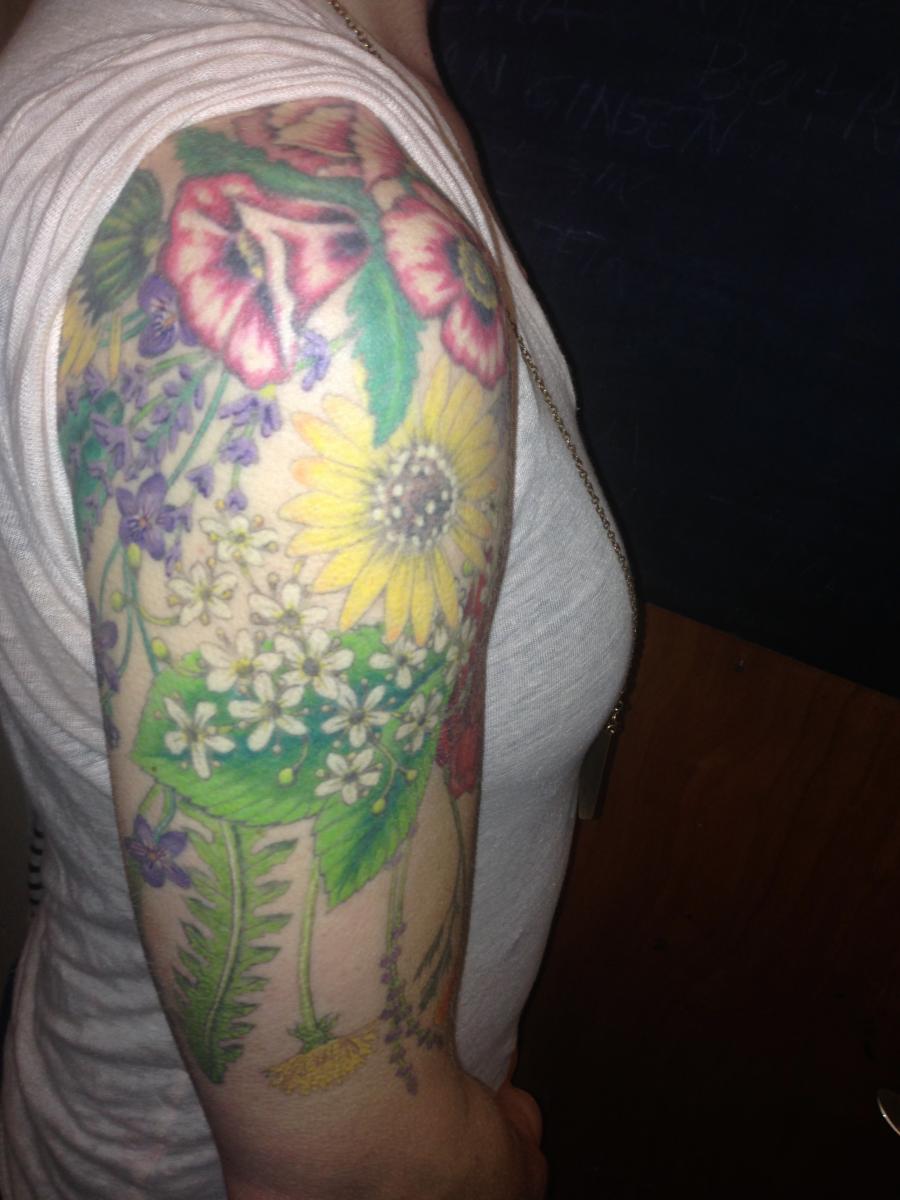 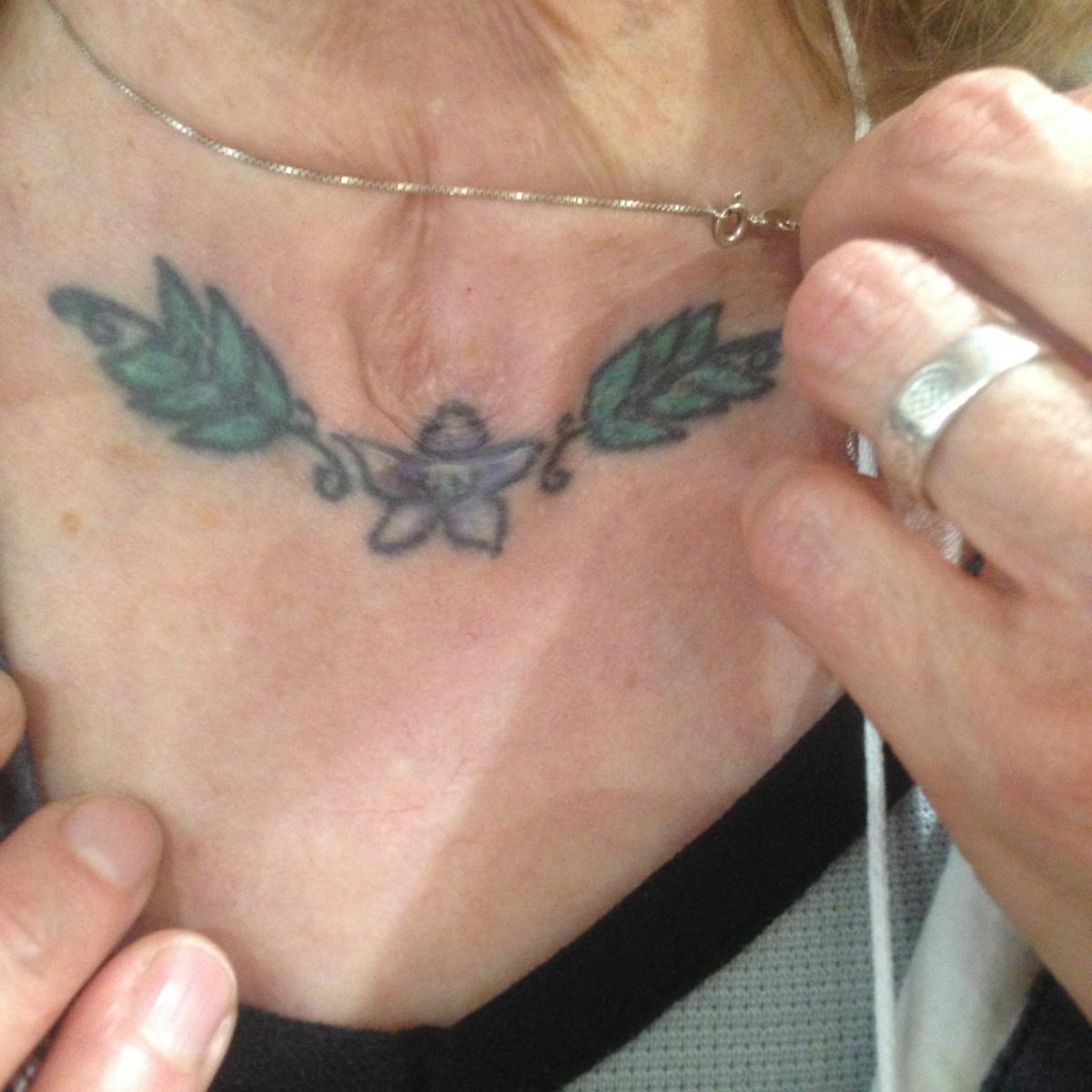 Carla Burton is a long-time member of the SOE. Her community work in northern British Columbia has been widely published and admired by many SOE and community members for years. While we took this picture of a badass Jacobs ladder on her throat, she remarked that “the artist didn’t make it anatomically correct”, referring to the extra leaf, but that doesn’t stop us from admiring this beautiful ode to a classic favourite.