In early May of 2017, I packed up my Honda hatchback and drove thirteen hours from Lafayette, Indiana to New Orleans, Louisiana for a husbandry internship with the Audubon Butterfly Garden and Insectarium. During my internship, I conducted ethnographic research for my Applied Anthropology Master’s project, which looks at people’s attitudes toward edible insects in the United States.

Anthropologists researching insect foods might bring to mind long-horned grasshoppers as bar food in Uganda or fried tarantulas on the streets of Thailand, but I work with insect eaters in the United States. While those studies would be interesting (and delicious), I believe it is more important to understand the negative attitudes people have towards bugs here in the U.S.

U.S. Americans use around a billion (that’s “billion” with a “b”) pounds of pesticides, costing billions (again, with a “b”) of dollars, every year. The U.S. Food and Drug Administration does not label insects as food, but rather as something that contaminates food – in the same category as rat poop —even though insects are safely eaten all over the world. We do not generally like bugs here in the U.S., and our purchases and policies reflect that.

This dislike has a negative effect on our ecosystems in the U.S., as some beneficial species become endangered due to human practices. Our high pesticide use and common categorization of insects as inedible can also have an impact on environments and food systems around the world. Thanks to globalization, U.S. practices and ideas are spreading at a rapid speed to other places, many of which regularly or seasonally eat insects. And it is not simply that increased pesticides will result in inedible insects – the notion that insects are inherently inedible creates problematic divisions between those that eat bugs and those that do not. I don’t believe that people in the U.S. need to begin keeping insects as pets or even necessarily start including them in their diet. But it is essential for the U.S. to view insects and other arthropods as a valuable part of the environment and bugs as a possible food source, whether individuals chose to eat them or not. 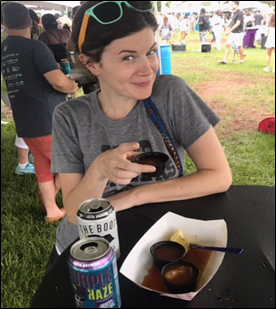 It was with these impassioned thoughts bouncing around my head that I began my work at the Audubon Insectarium. My first day was overwhelming and enlightening, as first days often are. I quickly learned my duties as a husbandry intern: servicing the animals living in the Insectarium and talking to visitors about arthropods at five different interactive stations. These stations educate visitors by incorporating multiple senses. For instance, at the Field Camp station, visitors are encouraged to touch the exoskeleton of a live Giant African Millipede or listen to the “hiss” of a real Madagascar Hissing Cockroach. Visitors are even able to taste a few species of insect at an edible insect station known as Bug Appétit.  Like me, the staff at the Audubon Insectarium are interested in normalizing edible insects for U.S. Americans, instead of simply used in high-end restaurants or for shock value on Fear Factor. The edible crickets, mealworms, and waxworms at Bug Appétit are served whole so that visitors can see exactly what they are eating, yet prepared in familiar spice blends, dips like salsa, and even chocolate chip cookies.

The author entering New Orleans, not yet eating insects.

However appealing I thought the edible insects at Bug Appétit were, guests did not always agree. One afternoon, a family – including a grandfather, a mother, and a child/grandchild — entered Bug Appétit. The grandfather seemed intrigued by the selection of edible insects, especially the cricket-based chocolate chip cookies (sold as Chocolate Chirp Cookies). The grandfather asked the child if he wanted a cookie. At this point the mother intervened, stating that what he was offering was not, in fact, a cookie.

“It may taste like it, but it’s not,” the mother snipped, as she grabbed the child by the shoulder, escorting him away from Bug Appétit. Ethnobiologists familiar with local taxonomies may find this phenomenon familiar.  According to this woman, something that had once been food was now categorized as not-food simply by adding a completely edible, nutritious cricket!

On another occasion, a visitor came to Bug Appétit to eat a Chocolate Chirp Cookie (they are, by far, the most popular item). She was aware there would be a cricket on the cookie, but happened to grab a cookie which had two crickets placed on top. The visitor noticed the additional arthropod as she was moving it toward her mouth – she screamed and dropped the cookie onto the floor. For this particular visitor, one cricket was acceptable when she knew what to expect, but two crickets was not part of the deal. She decided not to try a one-cricket cookie after her experience.

Yet not all edible insect encounters ended poorly. During my time at the Insectarium, several school groups visited the museum on field trips. On one such field trip, a young boy (around 5 or 6 years old) ate a cricket cookie and promptly vomited on the floor of Bug Appétit. The other children in his group seemed completely un-phased by this, stepping over puke to grab their own cookies, which they knew contained insects. However, after the vomit was cleaned up and the boy was attended to, he came back to the counter for another cookie!

A number of visitors already knew about the benefits of eating insects—they are nutritious, they are more environmentally-friendly than current animal agriculture, and they are abundant. Many of these people tried one or all of our edible insect items, though some were not fans of the taste or texture. One visitor had previously worked in Southeast Asia, where he tried many types of edible arthropods, including a fried scorpion. He said he expected it to taste similar to crab or shrimp, but instead just tasted like anything else fried. He didn’t mean this in a negative way – in fact his exact explanation was “Chihuahua poop would taste good if you deep fried it”. Perhaps this will be an encouraging insight for those people working on product development of edible insects!

By the end of my three-month internship, I tong-fed a giant Centipede, ate a live waxworm, and prepared insects in a variety of ways. Every day I learned something new about animals – including the humans with which I worked and interacted. The data I collected this past summer consisted of interviews with entomology staff, questionnaires with visitors, and participant observation in the spaces in and around the Audubon Butterfly Garden and Insectarium. It is my plan that the results from this data will inform museums, zoos, and other organizations on how to educate people in the U.S. on arthropod acceptance and edible insect normalization.  On my final day at the Audubon Insectarium, I said good-bye to my human and arthropod friends, and, as I left Bug Appétit, grabbed a handful of Chocolate Chirp Cookies as a souvenir.

Mealworms await their fate in the Insectarium

Alison Kirkham is a second year Master's student studying Applied and Cultural Anthropology at Purdue University. Her research looks at U.S. Americans' perceptions of arthropods, especially as a form of food. Alison was raised in Birmingham, Alabama (Roll Tide) and currently lives on an apple orchard in Lafayette, Indiana with her dog, Chicken.  Learn more about the Insectarium here and here.  All photos taken by Alison Kirkham.