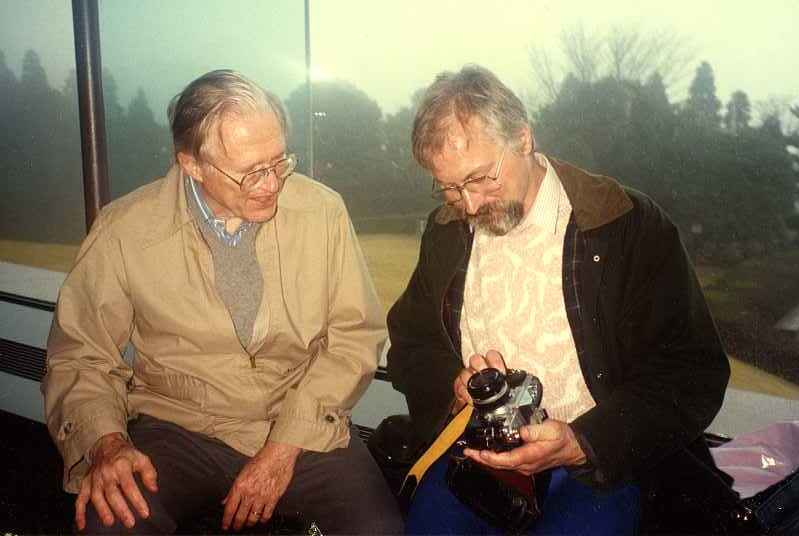 Harold Colyer Conklin died on 18 February this year. Hal was a linguist and cultural anthropologist who had his main impact in the fields of formal semantic analysis, ethnobiology, and the study of agricultural systems. He was in that generation of scholars who were deeply affected by their experience of the Second World War in the Pacific, in Conklin’s case taking him to the Philippines, but also to other parts of island Southeast Asia. He was much later to document this part of his early career (Conklin 1980), listing the people he met and who advised, supported, and influenced him with the same care and detail that became a hallmark of his writings, say, about the uses of a Hanunóo plant or an Ifugao pond field, and which served us well in his meticulous editing of Raymond Kennedy’s field notes for the Human Relations Area Files.

Born in Easton, Pennsylvania on 27 April 1926, Harold Conklin grew up in Patchogue on Long Island. Anthropologically precocious, at high school (1941-3) he was taken under the wing of Clark Wissler of the American Museum of Natural History, where he served as a young volunteer. In 1943 he enrolled at Berkeley, where he was taught by Robert Lowie, Alfred Kroeber, Edward Gifford, and Carl Sauer amongst others, and where he also learned Malay from a cook at the Berkeley Cyclotron. In 1944 he joined the army, living in the Philippines for the next four years. He arranged to be discharged in 1946 in the Philippines, which allowed him to begin fieldwork, and where he taught Tagalog to serving US soldiers, met a lot of local and international scholars and travelled widely, spending time with the Hanunóo on Mindoro and with Tagbanuwa on Palawan. Among the Tagbanuwa he was introduced to ethnobotany under the tutelage of Harry Bartlett, collecting for the Philippines National Museum. Towards the end of 1947 he travelled around Southeast Asia and in the archipelago as far east as Sulawesi, returning to the US via Europe, where at the London School of Economics he met Raymond Firth (whose hospitality he considered generous) and Edmund Leach.

Hal completed his undergraduate degree at Berkeley in 1950, and moved to Yale for graduate school in the same year, where he published a catalogue of his Hanunóo bamboo manuscripts as well as a 600-page dictionary. At Yale, he was supervised by Floyd Lounsbury, who was to go on to initiate componential analysis in linguistics, and where he was much influenced by his contemporaries and life-long friends William Sturtevant and Charles Frake. He returned to the Hanunóo for further fieldwork in 1952-54,completing his PhD in 1954. Immediately afterwards he took up a teaching post at Columbia – where he met amongst others, Claude Lévi-Strauss. All told, he worked among the Hanunóo between 1947 and 1958, and among the Ifugao between 1961 and 1973.

Conklin’s doctoral dissertation, The relation of Hanunóo culture to the plant world (1954) was in retrospect a major event in the emerging anthropological study of ethnobotany, transforming it from the theoretically sterile listing of ‘useful’ plants to the linguistically-informed study of a cultural knowledge system. Remarkably – although a few papers were later to appear based on this work (e.g. Conklin 1962) – the dissertation was never published as a monograph, circulating only in photocopied, microfilmed and latterly digital versions, like some ‘samizdat’ copy to be inspected with difficulty and only available to the intellectually curious. Not only did the approach and methods outlined in his dissertation kick-start an interest in ethnobiological classification in the American ethnosemantics tradition (guiding, for example, the more widely-known work of Brent Berlin), but it was an underlying empirical source for a large part of Lévi-Strauss’s argument in The savage mind regarding ‘la science du concret’, following on from that original contact at Columbia.

For a young British anthropologist, such as myself, grappling with current issues in environmental anthropology and the cognition of the natural world in the late 1960s, Conklin’s work could on occasions seem challenging, austere and technical. But – equally - for those appreciating this from afar there was an excitement (so it seemed to us) in the sometimes recherché and obscure subject-matter and manner of publication, but most of all in a recognition that this work was evidently important, bringing a new degree of ‘seriousness’ to the task of ethnographic description and analysis of the ordinary. By ‘thinking through things’, and through a profound respect for the knowledge of his producers and guardians, Hal anticipated a more recent generation of fieldworkers, who more controversially have re-asserted the importance of research practices which challenge us to respect the ontology of the other (see e.g. discussion in Chua 2012).

In the connected area of environmental anthropology, Conklin was the first to comprehensively bring together and critically interrogate the disparate literature on shifting (swidden) cultivation, insisting, through his own landmark monograph Hanunóo agriculture (1957), on the importance of an ‘ethnoecological approach’ - that is, one which highlighted local categories and understandings. Indeed, he probably invented the term ‘ethnoecology’. By the same token, his defense of intelligent swiddening as a knowledgeable and sustainable form of land use was prescient, a warning against the dangers of overgeneralization in how we characterize agricultural systems, and against the simplistic ways in which these are often appropriated to the agendas of a certain kind economic development policy.

Of all Hal’s writings and research projects, the tour-de-force must surely be his Ethnographic atlas of Ifugao (1980). This is a wonder to behold and a monument to the marriage of ethnographic ground-truthing, the cartographic arts and map-production technology, the culmination of half a career’s fieldwork. In demonstrating the means by which an entire terraced and irrigated wet rice landscape was created through local knowledge and skill, and in its innovative use of photographs to illustrate continuity and change, it remains an extraordinary achievement in historical ecology and participatory mapping. While proudly displayed in the local museum in Banaue (at least in 1998) as a celebration of Ifugao engineering skill and indigenous heritage, it was problematic only in its failure to translate into an analytical and interpretative scheme with a wider impact than it might have been thought to deserve (Ellen 1982) in methodological terms. Indeed, the Ethnographic atlas of Ifugao is in several ways a perfect contrast to Hal’s PhD on the Hanunóo: the first charmingly low-tech and unconventionally disseminated but with high long-term impact, the latter high-tech in its research methods, production and publication, yet of restricted influence.

Hal published relatively little by way of conventional monographs and journal papers compared with other influential anthropologists of his generation, and much of what he did publish was out of the mainstream. Fortunately, some of the most important pieces were gathered together by Joel Kuipers and Ray McDermott in 2007 under the title Fine description, a term coined by Charles Frake as a way of evoking the essence of Conklin’s distinctive style, compared to Clifford Geertz’s notion ‘thick description’. Given this, and his modesty about the significance of his writing achievements, it is therefore even more remarkable that Hal should have not only left his mark in so many intellectual fields, but have been a pioneer in them as well. These fields included ethnobiology, of course (and in particular folk classification), the underpinning of ethnoscience as a formal approach, the study of colour categorization (cognitive anthropology),and what came to be known as ‘indigenous knowledge systems’. Moreover, he embarked on a fundamental rethink of how we should make sense of data on kinship terminology (‘ethnogenealogical method’), and documented of a form of literacy that runs counterintuitive to some of the grand narratives of how writing evolved socially and how we should gauge its cognitive implications. His impact was always, however, through the example of his ethnography rather in any extravagant claims he might make for a particular approach – and he seldom wrote about ‘theory’ in the abstract – his being always of the ‘grounded’ variety.  His focus on ethnographical detail did not always make him friends and it was unfair that his role as the standard-bearer for the ‘new ethnography’ and an anthropology of the ordinary, should make him a scapegoat for what Marvin Harris rudely called ‘the science of trivia’. Hal’s genius was to take cultural data that others had assumed to be trivial and demonstrate through ‘fine description’ new ways of looking at data. What is remarkable about his work is its empirical scope and his ability to bring the same thoroughness and care to everything, whether it was the analysis of Hanunóo gong metallurgy or Ifugao orthography, ‘linguistic play’ or early Philippine scripts.

Hal was also a dedicated museologist and student of material culture. Not only did he build a comprehensive Philippines collection at the Peabody Museum of Natural History at Yale in his role as Curator of Anthropology between 1974 and 1996, and collect 1,500 objects for the American Museum of Natural History, but he also contributed collections to both the museum of the International Rice Institute in Los Baños, and to the Banaue museum in the heart of Ifugao land. He was an ethnographic film-maker, ethnomusicologist, and bibliographer, and to all these additional activities he brought the same intellectual rigour as well as providing helpful tools to enable others to better undertake their own scholarship.

Hal’s unique qualities as an anthropologist and person were recognized and celebrated during his lifetime. In 1984 he received the Fyssen Foundation prize, in November 1991 there was a special symposium in his honour at the American Anthropological Association meeting, and Fine description appeared in 2007. This latter, ostensibly a collection of selected essays, also comprised a series of tributes from academic authorities at the top of their various fields who owed Hal a debt of gratitude - a ‘festschrift’ in the true sense of the term. Harold Conklin was an intellectual hero of mine long before I first met him in 1992 in Japan, though we had corresponded intermittently. I came to know him as a warm and humane person, and his work was not only path-breaking but life-affirming. This latter might not have always been evident from the close-grained scrutiny that typified some of his technical writings, but it is absolutely there in celebrations of family life in Ifugao authored by Jean Mieko Conklin (2002), in his essay on ‘Maling, a Hanunóo girl from the Philippines’ (1960), and in his delightful piece ‘A day in Parina’, which he included in a 1953 report to the American Social Science Research Council, and which concludes:

23.45 I spread out my mat, check the fire, say good night to Badu’, and retire. But first ‘Nungu,’ Balyan, and I discuss indirect manners of speech in Hanunóo and end up having a riddle contest in which, of course, Balyan and I come out losers.

It is difficult to imagine including such prose in the kinds of reports that we are today expected to submit for audit to funding bodies, but in this piece we find a truly ‘Conklinesque’ combination of humanity and consummate professionalism. Hal showed us how new ways of thinking about how ethnographic practice might contribute to anthropology as a science, not only of comparative social systems and the universal character of cultural cognition, but also to an understanding of what makes us human(e) as well. It is absolutely appropriate that we should discover that the Hanunóo have invented the word konkirin (a transliteration of ‘Conklin’) to mean ‘things related to knowledge’.